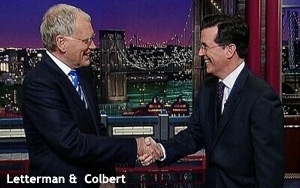 At first blush it looks as though CBS made a safe choice in Stephen Colbert to replace David Letterman next year when the “Late Show” host retires. Colbert is smart, funny, charming and very well-liked in the entertainment community -- all seemingly essential qualities any late-night host must possess to remain competitive in an increasingly crowded arena.

But on closer inspection CBS has made a decision that will invite even greater scrutiny and speculation (and thereby generate even more publicity) than that which comes with any change at any late-night show (a subject, by the way, that I am convinced is of far more interest to people in the media, especially reporters, than to anyone else anywhere). When new hosts prepare to move into old shows their actual debuts are preceded by months of specific questions and massive musings about how that new person will fare. (Why am I using a gender-neutral term like “person” when we all know the more accurate words are “man” or “guy” when discussing late-night broadcast hosts?) Will he be as funny as the guy he replaced? Will the previous guy’s audience stick around for the new fellow? Will those all-important young adult ratings tick up or down once he settles in?

In this case, however, we have an entirely new mystery to speculate about for the next 12 months or so: Who did CBS hire? Will the new host of “Late Show” be anything like the satirical character named Stephen Colbert (pronounced Col-bear) whom we have all come to know so well on his Comedy Central gigs, or will he be the “real” Stephen Colbert (pronounced Col-burt) -- someone most of us hardly know at all? Stephen has been acting as Col-bear -- an arch-conservative pundit and a bit of a buffoon -- throughout his long run as a “reporter” on Comedy Central’s “Daily Show” and as host of “The Colbert Report.” It has already been reported that he will not bring that persona to his new gig at CBS. So it seems in some ways the guy people will be asked to tune in and watch will look very familiar, but actually be quite different.

There are also questions about what the “Late Show” will be like with Colbert at the helm. Will it maintain the same basic format of all broadcast late-night shows? Will it be more of a party atmosphere? Will it be filled with skits and stunts like the competing shows on NBC and ABC, or will it be more conversation- and interview-driven? Will he have a co-host?

Regardless, Colbert is sure to please the same subset of the available late-night audience that has already embraced Jimmy Fallon and Jimmy Kimmel. Of course, he already has a small but loyal following there. The larger question is, will he appeal to anyone else? The pre-Fallon three-way late-night race between David Letterman, Jay Leno and Jimmy Kimmel offered something for everyone -- Letterman as the late-night veteran who changed the perception of what a talk and comedy show in the daypart could offer, and who brought a distinctive New York sensibility to his program; Leno as the favorite of working-class viewers outside of major urban centers and media hubs, which is most of the available audience (most of which is now underserved), and Kimmel as the affable Hollywood insider.

Now we have a two-man competition between Fallon and Kimmel for late-night dominance with Letterman as the sudden short-term spoiler -- as he counts down the final months of his gig, his guest list will likely swell with some of the biggest names in entertainment and politics and his ratings should rise accordingly. When Letterman departs, it will become an epic three-man challenge. And all around the broadcast hosts, the more interesting late-night personalities will continue to do their thing: Craig Ferguson (who would have been just as welcome a choice as Colbert to replace Letterman), Seth Meyers (who grows more appealing by the week as the new host of “Late Night”), Andy Cohen (whose intimate and energizing “Watch What Happens Live” on Bravo is the show that I wish Meyers’ “Late Night” more closely resembled), Conan O’Brien (strangely off the radar at TBS and also someone who might have been a good fit at CBS), Chelsea Handler (who is reportedly leaving her gig at E! by year’s end, and who could easily become this country’s Graham Norton if a smart executive at a basic cable network gives her a weekly hour of prime-time real estate), and Colbert’s schedule mates at Comedy Central, Jon Stewart and Chris Hardwick.

Meanwhile, speculation has not even begun as to whether or not Comedy Central will seek to replace “The Colbert Report” with a show hosted by another “Daily Show” veteran or perhaps move Hardwick’s “@midnight” to 11:30, which on any other network would necessitate a new title for the latter, but not necessarily at the home of “Tosh.0,” “South Park” and so many other shows that defy traditional television conventions. Perhaps it should just give Hardwick an interactive talk show of his own -- he’s awfully good in that capacity on AMC.