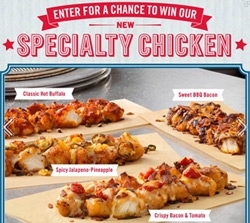 Domino's' national campaign for its just-launching Specialty Chicken products poke fun at past menu innovations that, well ... didn't pan out.

In fact, the campaign's theme is that failure is an option at Domino's.

"We are proud to be known as a pizza company, but Specialty Chicken shows we are not afraid to step out of our comfort zone and take risks – something that is truly part of our brand fabric," said CMO Russell Weiner. "Not every risk we have taken has turned out to be successful, but as a brand we have learned that sometimes you have to fail in order to be great."

One of the TV ads in the new campaign, which will officially launch on April 21, shows its product innovation director expressing that "risks are necessary to achieve greatness" philosophy. After he mentions one past flop, the "cookie pizza," the ad switches to the brand's pizza chef, who, with a dour expression, says she doesn't want to talk about the cookie pizza. (The reference is presumably to Domino's' Oreo Dessert Pizza, which was offered in the late 2000's. You can check out Chow.com's review of it on YouTube.)

For the new chicken item's launch, Domino's is also running a one-day Facebook-based sweepstakes on April 14. Those who "like" the brand and use its Fan Perks app on Facebook to register (giving Domino's permission to access their Facebook profiles) earn a chance to win a promotional code good for one of the 25,000 orders of Specialty Chicken being given away.

Chicken items aren't new to Domino's. In fact, it has been selling chicken wings for 20 years, and it sells more chicken than any food other than pizza, CEO J. Patrick Doyle told USA Today (where a sneak-peak video of one of the ads for the launch can be viewed).