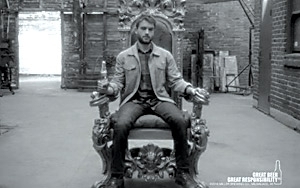 Miller High Life is focusing on the “haves” and not the “have nots” of a non-monetary type in a campaign that asserts that richness is how you live your life, not how much money you accumulate.

Since its beginning more than 110 years ago, the iconic beer brand has supported the search for what is “genuine” and “authentic” in our lives, says Amanda Devore Moehr, marketing manager for Miller High Life.

Miller High Life returns to television this month for the first time since 2012 with the debut of two national spots created by Publicis Group's Leo Burnett/Arc.

Shot in black and white on 35mm film, the new spots show normal people enjoying daily pleasures while an ironic voiceover compares these pleasures to high-cost luxuries such as yachts, country clubs and penthouses.

In addition to television, the brand is using other media to amplify the "I'm Rich" message. Print advertising will appear in popular publications including "Rolling Stone" and "Vice."  Miller High Life also will extend conversations socially with the re-launch of its @MillerHighLife Twitter handle and connect with legal age drinkers through Facebook.

Designs by the artists will be featured on High Life cans and secondary packaging. It will inform consumers about a contest where a custom Harley-Davidson bike is the prize, along with limited-edition posters and custom leather jackets.

Miller High Life is supporting the Iraq and Afghanistan Veterans of America (IAVA) in 2014. The brand will donate a customized Harley-Davidson bike to IAVA for an auction, with proceeds benefiting the IAVA.