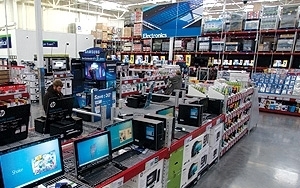 Wal-Mart-owned Sam’s Club is out to win more sales of consumer electronics, and says it expanding its warranty coverage. Anyone who buys a TV priced at $500 or more gets a $99 four-year SquareTrade protection plan that includes delivery, set-up, haul-away and recycling of their old TV. The deal, exclusive to Sam’s Club, also provides a guaranteed buyback program that allows Sam’s Club members to trade in their TV within six months, and get to half of its price back on a gift card.

“The demands upon the consumer to research, understand and operate technology on a daily basis are greater than ever before,” the retailer says in its release. “People need an expert in their court, a resource they can turn to, to help them not only simplify but maximize the potential of technology. Through our program with SquareTrade, we’re delivering the best value in the industry and delighting members with services that make their lives easier.”

The improvements come at a time when consumers are increasingly open to buying gadgets from all retail channels. In its annual ownership study, scheduled to be released later this month, the Consumer Electronics Association says that among households who have made an electronics purchase in the last 12 months, 85% have done so in a physical store, with 58% making a purchase in a mass merchandiser, such as Walmart or Target; 48% from a store specializing in electronics, such as Best Buy or HH Gregg; and 22% at Sam’s Club, Costco, or another warehouse.

Walmart has said it expects sales at Sam’s Club to be flat in its latest quarterly results, which are scheduled to be announced in May. And in its most recent results, the Bentonville, Ark.-based company said net sales at Sam’s Club rose 1.3% to $14.7 billion for the quarter, while operating income fell 15.3%