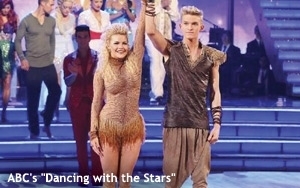 Apparently a robust Twitter following doesn’t guarantee success at everything one tries in life.

It seems the elimination of Cody Simpson and his partner Witney Carson on ABC’s “Dancing with the Stars” the other night shocked people not because Simpson is a popular young singer with decent moves but because he has approximately 6.55 million followers on Twitter.

Don’t take my word for it. Here’s the reaction from “Extra” host and former “Dancing with the Stars” contestant Mario Lopez last night on his syndicated entertainment news program: “Wow! With 6 ½ million Twitter followers I was kind of surprised Cody went home.”

How about this remark from Shaun Robinson on last night’s edition of “Access Hollywood”? She referred to Simpson getting the boot as “a surprise elimination considering he has 6 ½ million Twitter followers.

I can only imagine how many other pop-culture overseers formed the same conclusion.

Certainly, contestants on all competition series that depend on support from viewers to remain in whatever game they are in now use Facebook, Twitter and other social media to encourage their followers to turn on, tune in and vote, vote, vote for them. But that doesn’t always guarantee them perpetual success, as demonstrated earlier this week with the Simpson scenario.

It’s probably lame to suggest that having millions of followers on any particular social media platform doesn’t mean that every one of those followers will see every tweet that one tweets or post that one posts; or that every follower will do as commanded by everyone he or she follows. That statement is a social media buzz kill if ever there was one. Here’s another: Followers who are always there, reading and responding as asked to every tweet and post, are likely people with “no lives,” to use an old-school term, or shattered attention spans, a more current description.

“Dancing with the Stars” has a rich history of surprising and painful eliminations, dating all the way back to 2005, when social media was not yet mainstream and Twitter wasn’t even a thing. It also has an audience composition that skews 50-plus. Viewers in that age range might be motivated to pick up a phone and call in a vote or two, or to vote online, but they aren’t going to devote very much time to the effort, since they tend to have lives or at least other interests. That’s the problem with the increasingly complex voting options on “Dancing” and “American Idol”; they reinforce the idea that a lone vote no longer matters. When it comes to these shows, the new mantra is Vote Big or Go Away.

Of course, the take-away from the voting issue is that it seems to favor the young and digitally driven over older viewers, which doesn’t explain why Simpson, a teen and tween fave, fell out of favor. Or does it? Maybe young Americans don’t see Simpson as all that and a bag of chips.

Anyway, Simpson – an Australian singer still based in his country, according to his Twitter bio – may simply have lost out because most of his fans and followers are located there, rather than here. That doesn’t mean they aren’t active on Twitter, but they may not be active when “Dancing with the Stars” is telecast here and in the hours that follow. I have no knowledge of Simpson’s fan base or how it operates, so I can only speculate.

I do know that some of them were paying attention Monday night, because guest judge (and former “Dancing” winner) Donny Osmond, who was tough on Simpson, has reported receiving nasty tweets from Simpson’s rabid fans.

More likely Simpson’s elimination is just one of those surprises that keep “Dancing” so vital after all these years, especially when the eliminated individual is young, energetic and clearly a better dancer than many of his or her competitors who move on. (I remember the shock waves following the elimination of Sabrina Bryan early in the fifth season of “Dancing.” Bryan, one of the Disney Channel’s beloved Cheetah Girls, was riding a wave of popularity from that TV-movie series and she was also a phenomenal dancer. Nevertheless, she didn’t score with viewers and she was tossed.)

Nevertheless, Simpson’s exposure on “Dancing with the Stars” will do what it does for almost everyone who participates: Further support an already successful career (or re-ignite one that was one the decline, at least briefly). Indeed, immediately following his elimination from the show – when he was about to receive maximum media coverage -- he released the music video for his latest song, “Surfboard.”