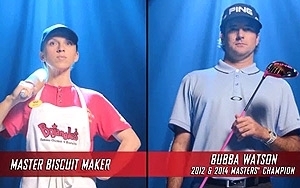 Bojangles' Famous Chicken and Biscuits, a major player in the Southeast, is far from a newcomer to the breakfast arena.

The biscuits are always made from scratch, and only by the official "Biscuit Maker" on staff at each location. The biscuit makers have had at least 40 hours of training in the art, and they compete annually for the chain-wide title of "Master Biscuit Maker" (and a $1,000 prize).

The first spot features pro golfer Bubba Watson, who won his second Masters championship on April 13 -- a buzz-factor bonus for Bojangles, which shot the spot before this year's tournament (although updating the graphics to reflect his second win added some modest costs to the campaign, according to the agency).

Watson is shown kneading dough with a driver, then using it to powerfully drive dough balls at the oven door, where they remain stuck even as the Master Biscuit Baker is pulling golden brown creations out of another oven.

The second spot, breaking in late spring/early summer, will feature sports fisherman Guy Eaker, of TV’s "Bass Master" series. More ads are planned, though the sports figures have not yet been chosen.