Between A Rock And A Hard Place: Why TV Isn't Anywhere On The WWE Network

The WWE Network is the greatest thing I’ve ever seen.

Okay, that overstates the case a bit. So how about: Assessed in the broader context of human experience, the WWE Network ranks behind sunlight, indoor plumbing and relaxed-fit pantswear. But as a detail-attentive leveraging of an established media property’s past and current content, it sets the standard for everything to follow. It feels like the future. A few years from now, we’re going to look back on its debut as the first shot fired in a revolution.

I say this as a lapsed wrestling fan and a middle-aged dude who, for some time, had been set in his media-consumption ways. Most nights, I tucked in my son, fetched myself a snifter of Cocoa Puffs and watched whatever happened to be on TV, which I managed with a small device configured to operate electronic equipment from a distance (a “remote control,” if you will). There was, and is, comfort in this routine.

So when WWE announced the rollout of its streaming-only network back in January, I couldn’t help but notice a word that was missing from the introductory press release: television. One can watch the WWE Network on iOS and Android devices and via PlayStations 3 and 4, Xbox 360, Roku and Apple TV. One can even watch it on oh-so-passé computer machines. One cannot, however, turn on the television and find WWE Network anywhere on the cable dial.

In theory, this approach sounds almost willfully disruptive and self-sabotaging. A 24/7 television-like network that isn’t on TV? Lay off the basement hooch, Junior.

In practice, however, it sings. The content -- more on that in a bit -- begs the thesaurus to come up with a stronger word for “encyclopedic.” The video quality is on par with anything you’ll see on television. The technology, built in conjunction with the folks at MLB Advanced Media… well, the technology works, which is more than can be said for many similar online plays. Taken together, these attributes render the WWE Network precisely the type of property that could prompt luddites and/or lazy asses to drag themselves into the multiscreen era.

Which isn’t to say that the WWE is relying on laggards to make the network a success. According to WWE chief revenue and marketing officer Michelle Wilson, the company did loads of research prior to cementing plans for the network. It learned that its core fans consume five times as much video content online as the average consumer and are twice as likely to have a subscription to Netflix or other streaming service. “The light bulb went on,” she says.

Thus was born the online network/library hybrid. With an eye on one day creating a wrestling channel of some kind, WWE had years ago snapped up the tape libraries of now-defunct competitors and set about digitizing them. What this means is that the network came into being with more than 130,000 hours of content to play with, everything from old pay-per-views to this week’s WWE Raw. From that content it can create new programming like WWE Countdown, which lets viewers debate/celebrate the best wrestler entrances, finishing moves and catchphrases. On Thursday night, it rolled out WWE Legends’ House, which is everything its name implies and, yet, somehow more. “I’d say we have the content area covered,” Wilson quips.

Did I describe myself before as a lapsed fan? Much to the great joy of my wife, a few days with the WWE Network reawakened my latent fandom and birthed a new disciple in our kid. This has less to do with the regular programming than it does the copious amount of material in the library, and the wonderfully intuitive way it is organized and indexed. You can search by wrestler or by event. You can track down the matches and segments you remember fondly from your youth, and disappear down the rabbit hole for hours.

“We really pushed ourselves with things like milestone markers -- like being able to skip ahead to the Rock/Cena match at WrestleMania 29. The goal was to launch with something that was easy to use,” Wilson says.

Separately, for those who have been away for a while, it’s striking how different the modern-day WWE product -- all color and volume and bombast -- looks when viewed next to the long-ago footage of dimly lit hulks in unflattering tights. Also, Cesaro? Get a strap on that fella.

When asked who else could create a network of this kind, Wilson declines to speculate. “I’m not sure, to be honest. The WWE is unique. We’re content creators and we control our intellectual property.” But any of the sports leagues, even the ones with preexisting cable/satellite channels, could pull off something similar, no? The mere possibility of adding a searchable game/play/player archive to my MLB Extra Innings package makes me dizzy with anticipation.

League commissioners and their media underlings have to be watching the WWE Network, scratching their chins pensively and thinking to themselves, “Cut out the middleman, eh?” I’d think the unspoken threat of that alone could make negotiations with cable/satellite providers and other would-be media partners slightly more interesting.

But what do I know? I’m just some guy who spent the last three hours of his time-limited adult life watching Mr. Perfect matches. I can safely say this, however: If you’re a WWE fan, you owe it to yourself to check out the WWE Network. If you’re intere 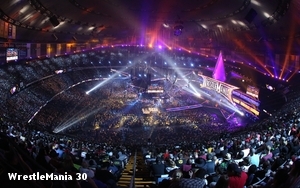 sted in the future of media, particularly as it pertains to high-profile properties, you owe it to yourself to check out the WWE Network.

I have no clue whether the network will prove a winner from a financial standpoint -- WWE stock took a hit after the company reported 667,287 subscribers on April 7, the day after WrestleMania 30 -- nor whether it can keep casual fans on board past the initial six-month subscription period. But in terms of doing right by its fans, WWE couldn’t have come out of the gate any stronger. More than any new property in years, the WWE Network bears close watching.

sports, streaming, video
1 comment about "Between A Rock And A Hard Place: Why TV Isn't Anywhere On The WWE Network".
Check to receive email when comments are posted.
Next story loading