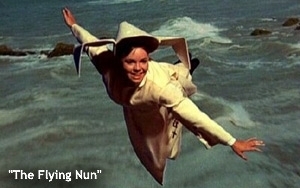 AMC’s “Mad Men” may be the go-to show right now for a look at the advertising business in the Sixties, but every now and then an episode of a classic series from that decade offers an entertaining look into the machinations of Madison Avenue at the time.

The obvious choice for an innocent, retro appreciation of the business during that romanticized period is “Bewitched,” the classic comedy about a loving witch married to a hard-working advertising executive. “Bewitched” ran from 1964-72, so it can be argued that as silly as it was, it also reflected the ad business as it was thought of at the time. But as “Mad Men” continually makes clear, that's not exactly a realistic representation. But it worked, because television in that day was all about entertaining people rather than constantly reminding them about the harsh realities of real life.

Which brings me to “The Flying Nun,” one of the most unreal sitcoms of that period — and one that, in an episode titled “The Candid Commercial”— which I recently caught on Antenna TV — took on the advertising business, as well. At one point in the story Sister Bertrille, the title character, played by Sally Field, innocently suggested that the “men” on Madison Avenue might face the wrath of God!

The episode began with the nuns at the Convent San Tanco in San Juan, Puerto Rico (where the show was set) worried about their ancient washing machine, which had broken down and, given its age, defied repair. While the Reverend Mother and the other nuns concerned themselves with finding funds for a new machine, Sister Bertrille took the week’s clothes to a local laundromat. Unbeknownst to her, a producer of successful television commercials named Harry Madison (played by Pat Harrington) was inside with a hidden camera, hoping to solicit in “one beautiful take” an unrehearsed testimonial for Delight detergent – the very soap the nuns used to do their wash.

“We struck it rich!” exclaimed Mr. Madison to his cameraman when he spied a nun entering the facility with a box of Delight. He was even more joyous when Sister Bertrille said that she loved Delight because “it does half the scrubbing for you!”

“Yes, but does it have Z, Y, X or any of those miracle ingredients in it?” Mr. Madison asked her, camera rolling.

“For all I know it may just have soap in it, but it works great!” Sister Bertrille enthusiastically replied. After her wash was done, she held up a couple of garments and said, “Maybe Delight doesn’t have X, Y or Z or ultra-hyper stain getter-outer in it, but does yours get them this white?”

Mr. Madison was in heaven. He then told Sister Bertrille that she had been doing a hidden camera commercial for Delight. “There is our camera!” he said, pointing to a lens the size of a salad plate protruding from curtains at the back of the room. How Sister Bertrille missed it defies rational explanation, but then again sitcoms of the era weren’t known for their realism.

“You’ve been filming everything?” she excitedly asked, blissfully unaware of the potential consequences. Imagine how vulnerable she would be today in a world full of hidden mini-cameras, cell phones and Google Glass!

Sister Bertrille was only too happy to sign a release, but not before ensuring that her convent would receive a brand new washing machine and a year’s supply of Delight. By episode’s end, the crafty Bertrille had also negotiated a new dryer.

Later, Sister Bertrille explained to the Reverend Mother how and why she had been chosen to appear in the candid commercial for Delight. Happily babbling away— and quoting from a handful of popular product pitches at the time — she recounted telling Mr. Madison, “I’d rather fight than switch. I’d walk a mile for Delight. It makes my teeth brighter and whiter and gives me less cavities and its good to the last drop, or whatever I said. I said all the right things.”

But there was a hitch. The Reverend Mother didn’t feel that it was appropriate for “anyone in the religious life” to appear on television “recommending a commercial product.” She then asked Sister Bertrille to go back to Mr. Madison and tell him she couldn’t appear in his commercial.

Mr. Madison, meanwhile, was thrilled with his latest work. “There are going to be a lot of happy advertising men in New York tomorrow!” he told Sister Bertrille. When she told him the commercial would have to be redone with someone else, he balked. “A lot of money has already gone into it!” he protested, refusing to honor her request.

“Wait until the Vatican hears about this!” Sister Bertrille politely threatened. “They have a lot of connections.”

“Not on Madison Avenue, Sister,” Mr. Madison replied. (Today that comment would be known as a “snap.”)

“Well, you had better tell those advertising men not to stick their heads out any windows during a lightning storm,” Sister Bertrille sweetly suggested, implying that God would not be pleased.

As she often did on the show, Sister Bertrille turned to local businessman Carlos Ramirez for help. He cleverly convinced Mr. Madison that his new star was the former girlfriend of a mobster who was now an informant and a go-go-dancer pretending to be a nun.

“We can’t afford to have any fakes in our commercials!” a stunned Mr. Madison declared. Sister Bertrille’s contract was torn up and he went back to the laundromat with his hidden camera, seeking a new subject.

Larry Tate and Darrin Stephens would have been cool with this situation, but one can only imagine how Don Draper or Roger Sterling might have handled it.

advertising, tv
1 comment about "'The Flying Nun' Takes On Madison Avenue".
Check to receive email when comments are posted.
Next story loading