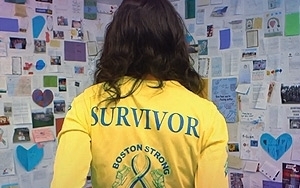 For the throngs of spectators, runners and viewers taking in the 118th Boston Marathon, the biggest brand beneficiary is probably … Kleenex. While it wasn't an official sponsor, tissues were everywhere, as more than one million poured into the city to help celebrate this year's race, now in its 29th year of sponsorship by John Hancock, and mark the one-year anniversary of bombs that killed three and wounded 260. Themed #weruntogether, the festivities featured almost as many marketing and corporate tributes as weepy marathon comeback stories.

The race this year includes 35,660 people, with more than 5,330 from outside the U.S. And in a twist that added to the event's poignancy, Meb Keflezighi, the first American man to win since 1983, crossed the finish line in a bib bearing the names of those killed last year.

Beyond the city itself, expected to reap some $175.8 million in marathon-related spending, according to city estimates, Hancock’s involvement continued to shine. (Jim Gallagher, president of both Hancock and The One Fund, the charity the company started just after the bombing with Hill Holliday, its ad agency, even threw the first pitch at Sunday’s Red Sox game, officially making him Beantown royalty.) Thus far, the group has raised $80 million for bombing victims. (For the anniversary, Hill Holliday created this moving tribute.)

And while Adidas is the race’s official apparel and footwear sponsor, its presence was relatively low-key. But in what has become something of an annual tradition, New Balance, a much-smaller Boston-based brand, ran away with messaging, trumpeting its April campaign—this year themed “Love Boston”—with more tweets, banners and T-shirt action than the German-based Adidas.

In addition to bus wraps and light pole banners, reports the Boston Business Journal, the brand has again plastered New Balance images throughout the Park Street MBTA, “a pivotal T stop, near where runners board the buses bound for Hopkinton on Monday, once featured Adidas’ name everywhere on marathon weekend. Now, it's New Balance’s turn for the takeover.” And those who posted photos with the hashtag #LoveBoston on Instagram could visit the New Balance store on Boylston Street, near the marathon finish line, to get a printed copy of the picture.)

Meanwhile, no word yet on how Twitter's image will fare after the event. A recent study from the University of Washington dissected the way the bombings, and subsequent manhunt, lit Twitter up with information that was often inaccurate. Following the two explosions on April 15, the FBI released photos and video surveillance of two suspects to enlist the public’s help in identifying them. The flurry of tweets, with such hashtags as #boston, #prayforboston, #mit and #manhunt intensified incorrect rumors, and while there were some corrective tweets, they were minimal.

“We could see very clearly the negative impacts of misinformation in this event,” says Kate Starbird, a UW assistant professor in the Department of Human Centered Design & Engineering, in its release of the report. The social-media research began recording tweets about 20 minutes after the bombing, ultimately including 20 million tweets.

It contradicts previous research, focusing on the 2010 Chile earthquake, which had found that Twitter users crowd-corrected rumors before they gained traction.