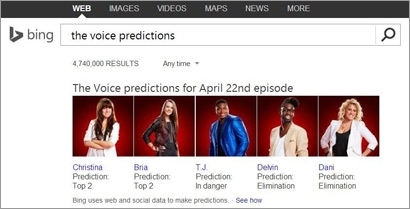 Microsoft believes it can predict the outcome of some favorite TV competitions like "American Idol," "Dancing With The Stars," and "The Voice." The latest feature in the Bing search engine analyzes queries and social network data to predict winners and losers of television shows when the outcome is based on the popular vote.

The first iteration of the tool attempts to predict the contestants that viewers will most likely eliminate or move on to the next round of voting on shows. Bing could use the effort to learn about predictive analytics and better understand the data to more accurately target ads. A hint at the bottom of the post from the Bing team tells us we can expect more from in this area beyond predictions for voting shows like "The Voice," "American Idol," and "Dancing With the Stars."

Here's how it works. Searching for a show or current contestant triggers the features. Bing searches will display a carousel format providing an estimation of the likely top contestants, those in danger, and the ones who are likely to be eliminated. For example, Bing predicts Caleb, 22, will become the next "American Idol" winner. He's currently a finalist from Asheville, North Carolina.

Bing relies on the popular vote based on searches. It defines popularity as the "frequency and sentiment of searches combined with social signals and keywords."

For "The Voice," Bing's model accounts for biases, such as regional preferences, and other measurable and observable trends. The technology also learned how to combine the prior popularity of a contestant with the contribution due to his or her performance.

Despite the popular belief that it all comes down to how well someone belts out a tune, Bing's data indicates that many people have favorites regardless of individual week-to-week performances. The predictive trends demonstrate the balance between search and social data.