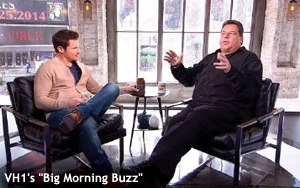 I'm not sure whether or not I should feel bad about the fact that until today I had never watched VH1's morning talk and entertainment shows “The Gossip Table” and “Big Morning Buzz Live.” It's not as though they haven’t been around for a while. “Gossip” premiered last June. “Big Morning Buzz” has been with us for three years.

Without planning to do so, I came upon these shows this morning and was pleasantly surprised by what I saw. They felt very fresh, although that may be because I hadn't seen them before. Or it could be that in their simplicity and energized eagerness to succeed they appealed to me in a way that bigger shows that work so hard to outperform each other do not.

In that regard, “The Gossip Table” and especially “Big Morning Buzz” deserve more attention (and higher ratings) than they are getting. “The Gossip Table,” which has a very strong companion Web site, features a panel of five entertainment reporter-blogger-journalist folks who dish the day’s celebrity news and play off each other like pros that have been working together for years.  Which brings to mind a general question: What is it about the number five on daytime talk programs? ABC’s “The View” started out back in 1997 with four co-hosts (including Barbara Walters) but never really came alive until it went with five. CBS’ “The Talk” -- arguably the liveliest talk show in daytime -- thrives with five. Fox News Channel’s aptly titled “The Five,” in which a quintet of highly opinionated journalists discuss and debate the issues of the day, is telecast at 5 p.m ET. I guess the secret of these shows is that, collectively, their hosts offer something for everyone.

Anyway, I don’t know what VH1 has planned for “The Gossip Table,” but with a little more of an investment (and if it were either expanded to an hour or paired with another like-minded half-hour program) it might have a nice little long-running success on its schedule. I suspect “Gossip” would also work very nicely if the network shifted it to early evening or even to the increasingly popular 11 p.m. time period (in its current half-hour format). With “Watch What Happens Live” Bravo has proven that an audience is available at that hour for lively talk and entertainment. I think the dish-driven “Gossip” would play well there, but it would have to be live and interactive. It might even do better than it does as a morning show. I would tune in just to see the incomparable sight of Times Square at night right outside the windows of the VH1 studios (the former home of MTV’s “TRL”).

Speaking of Times Square, “Big Morning Buzz” takes super-smart advantage of its locale a couple stories above the intersection of West 44th St. and Broadway. Host Nick Lachey (who took over as host earlier this year) chats with his guests in front of giant windows that look out on the crossroads of the world. They sometimes stroll to the window, wave at the crowd and take questions from passersby below. On this morning’s show Lachey and Jack Osbourne even took a question from a passenger on a passing Gray Line tour bus who had written it out on poster board. (That’s great planning and perfect timing on someone’s part.)

I would say that the effortlessly charming and laid-back Lachey seems to have been born for the “Big Morning Buzz” gig -- that’s how good he is at it -- but that might suggest that he is better at this than at singing (which he also does a bit of on the show) or hosting prime-time competition shows (like NBC’s “The Sing Off”). The guy knows how to keep a live hour-long show humming right along, and how to get his guests talking, and how to relate to the “regular” folks on the street. I’m not sure who or what the available audience is for a show of this kind on a basic cable network at 10 o’clock in the morning -- wouldn’t it work better in the old 3 p.m. time period that was once home to “TRL” (or at 4 or 5 p.m.)?  And it’s a shame that Lachey has to go up against Hoda Kotb and Kathie Lee Gifford on the frothy fourth hour of “Today.” But here’s hoping it stays around for a while.