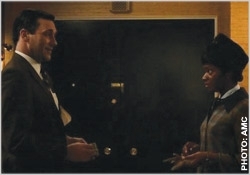 One day, Don Draper sleeps past noon, crawls out of bed, and discovers that he’s a giant insect.

This is Matt Weiner’s “Mad Men.” Same difference: both operate in a random, chaotic universe without any real sense of order or justice.

But because this is "MM," Don creeps out of bed, unshaven in his bathrobe, to his living room’s yummy black leather Eames lounger, where he smokes, eats Ritz crackers out of the box, marks his level of whiskey consumption on his Canadian Club bottle, and watches old black-and-white “Our Gang” comedy reruns on TV.

Then he spots a big bug marching around a corner in his apartment.  Indeed, his once enviable, snazzily decorated penthouse digs not only have an infestation problem, but are also looking a bit shabby, just like Don himself. He’s in limbo in all things. 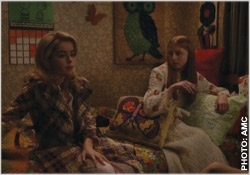 On the work front especially, he is not one of the gang. To keep abreast of the SC&P news, he needs to “bug” the office in the form of having his former secretary, Dawn, report to him. She sets clear, ethical boundaries for delivering the intel to him, but Don (who gets dressed at 8 p.m. only to fool Dawn into thinking he has some discipline) keeps pushing them.

Some viewers are already complaining about the glacial pace in this, only the second episode of the 7th season. But cheer up, people! There’s an exciting new component -- miscommunication-- with large helpings of death.

And Weiner tends to yank our chains by making the first few episodes of a season a teasy (some find tedious) slow burn, as if he wants us to get fed up, and then have to eat our words later, when we get rewarded by one stunning shocker after another.

We do, in fact, get a stunning shocker at the end of this episode: two of the finest, most gratifying scenes ever written and acted between Don and his daughter Sally. More on that later. 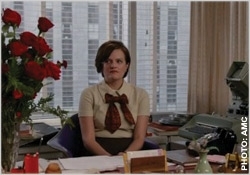 Meanwhile, miscommunication is the curse of death in a business that sells "communication" The center is not holding. Nor is the idea of racial integration, as ugly old beliefs flower right in the faces of Dawn and Shirley, the only employees of color, who jokingly exchange names because white people can’t tell them apart.

“Personnel” (and personal) issues are rearing their ugly heads. That’s why so many secretaries are in flux, carrying their possessions in boxes,  those ubiquitous symbols of the precariousness of the modern work world. (And a suggestion of a little coffin.)

And for an agency that prides itself on its new West Coast office, having the various parties in meetings screaming, “Hello, California!” and “Are you there, New York?” as if they were still in the age of Alexander Graham Bell, was pretty transparent, but also hilarious.

Yup, misunderstanding was one of the major themes: Peggy and the flowers, Roger mistaken for a “kike” because he’s taken to wearing a dramatically throwback black homburg, Pete and his new piece of business, Sally going to Don’s office and finding Lou, etc.

So, here we are on Valentine's Day: a manufactured occasion at best, devoted to “love” -- but as shown here on Madison Ave, just another “day’s work” in the currency of lies and deception. 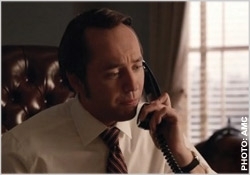 Don takes lunch with a guy from Wells, Rich and Greene (who jokes that he could “have” Mary if he wanted her.) When his old acquaintance from McCann stops by (whom Don “turned down, twice”) Don tells him that he’s just “looking for love.” Meanwhile, Jim, the rising power at SC&P, scorns Don as a “collective ex-wife who still receives alimony.”

That cross-country phone conference was full of vulgar, old-style dirty jokes, thanks to Roger, about setting people up to get laid (as he excused his language to his secretary) and “mounting” a client.

Peggy is now a caricature of a harridan, a former secretary now treating her own secretary despicably, the way a “male chauvinist pig” of the time would. And her stock around the agency is as low as her droopy bowtie, “Are these symbols of how much we are loved?” Peggy asks, looking at Shirley’s long-stemmed red roses that she mistakenly assumes out of arrogance, desperation and entitlement are her own.

Two seasons ago, Peggy was the feminist hero we all rooted for, who made her own future without having to prostitute herself, unlike Joan. Now she’s a mess (understandably), getting no love from Lou Avery, the terminally uncurious, self-centered nightmare of a non-creative director.

Indeed, Peggy is the blue lady shown hauling the roses back and forth, like a bad farce. By contrast, Joan gets to take her yellow flowers upstairs to the executive floor, moved upstairs by Jim, who’s also acting on his ulterior motives. That makes way for a promotion for Dawn, which was also a thrill.

The red roses are part of an overall rouge theme graphically, with Joan’s outfit, Shirley’s (too short!) dress, and Sally’s hat. And they are also part of the death theme. Peggy says her office smells like “an Italian funeral.” 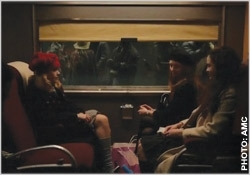 Earlier, she compounded the misunderstanding of the roses, (The War of the Roses?) by sending an angry, cryptic message to Ted that seems right out of “Romeo and Juliet,” the ultimate romantic play, except that it’s not about the death of Mercutio, but another kind of loss: “They don’t want to hear any more pitches -- the business is gone.”

Not to get too heady about this Shakespeare analogy, but Mercutio does say "A pox on both your houses" (New York and L.A?) before he makes a pun about being a “grave” man and dies.

Of course, the whole plot hinges on the fact that Sally’s roommate Sarah’s mother died, and she was allowed to go to the funeral.

“I’d stay here till 1975 if that would put Betty in the ground,” Sally says, a great line in a scene that shows these prep school girls to be monstrously callous. Yet later Sally comes clean to her dad, that seeing the body was much more upsetting than she imagined. “I don’t want you going to funerals,” Don says.

Poor Sally. One of the MM’s master themes is, can Don can ever redeem himself in Sally’s eyes?  The other is, can Sally (always a victim of tragically bad timing), ever escape the trauma and damage of her childhood?

“I am so many people” she says to her dad during that exquisitely rendered diner scene. And by the way, they share some white lies. At the gas station diner, Sally asks Don if they even needed gas. By the same token, did Sally really lose her purse?

Kiernan Shipka, the actress who plays Sally, has been allowed to age naturally over the seasons. She is a true star, and her scenes with Jon Hamm are like a master class in acting. Meanwhile, the writing was pitch-perfect.

This isn’t the father/daughter relationship that we saw earlier in the clip of “That Girl.”  It starred a young Marlo Thomas, who herself had a famous father, Danny, who starred in “Make Room for Daddy." The show was groundbreaking in that the character was trying to be an independent actress in the city. But she has a “Daddy” in the suburbs who worries about her. Meanwhile, Sally is the adult in the daddy/child relationship for most of the episode. The other show on Don’s TV, by the way, was also an inspired choice. “Our Gang," was the story of an integrated set of poor urban waifs who make their way without the luxury of parents, reminding us of Don's childhood.

What Weiner is showing us is that things take time. At first, Don was so ashamed and guilty in the car that he started attacking Sally, and comparing her to her mother, “always laying in wait.”

But they were able to stay in it and thrash things out. Sally pointed out how deeply traumatic it is just to enter Don’s building, worrying that she’ll have to wait in the elevator with Sylvia, and “want to throw up from the smell of her hair spray.”

Don was finally able to hear that -- to think of the repercussions of all of his reprobate actions.

Slowly, he came clean once again about what happened at work. “ The reason I didn’t tell you I wasn’t working was because I didn’t want anyone to know. I didn’t behave well. I said the wrong things to the wrong people at the wrong time. I told the truth about myself. But it wasn’t the right time. So they made me take some time off. And I was ashamed.”

Sally also susses out the truth about Megan.

And post-patty melt, they get back to school, and she gives Don the only true rose and note of love in the entire episode: “Happy Valentine’s Day,” she says, unexpectedly adding, “I love you.”

Don seems gobsmacked. And I was verklempt.

Will Sally’s love give Don the nudge that he needs to get off the lounge chair -- and call in the exterminator? It’s a complex drama, and this was an amazingly tough but great episode.

mad men, tv
23 comments about "Episode 702: 'A Day's Work' -- Or, The War Of The Roses".
Check to receive email when comments are posted.
Read more comments >
Next story loading