How Turner's Classic Became The Comic-Con Of Hollywood's Golden Age

These presentations all took place at Turner Classic Movies' recent fifth annual Classic Film Festival, where the network cements its tight bond with viewers by hosting real-life versions of its on-air formula: film screenings preceded by an introduction to provide context. “The festival heightens awareness of TCM to the broader public, with a bigger audience as a result,” said Charles Tavish, senior vice president of programming. The fourth version of TCM's Classic Cruise, a similar event held at sea, is scheduled for Oct. 21-26.

The festival has roughly doubled the size of its film inventory from its beginnings, to about 90 in 2014, when its rich variety ranged from David Lynch's surrealist 1977 horror flick “Eraserhead” to the heart-tugging 1941 family story “How Green Was My Valley” (introduced by a Q&A with 93-year-old star Maureen O’Hara). It has grown large enough that one attendee likened it to Comic-Con, with which it shares a similar insider-ish atmosphere -- as if “everybody speaks the same language,” said Sharon Sveinson of Manitoba, Canada, who has attended several times. "You can always start talking to people waiting in line."

Those people are not always the “stereotype of who our audience is,” noted TCM weekend daytime host Ben Mankiewicz. He quoted research finding that two thirds of viewers were 18- to 49-year-olds -- younger than the stereotypical grey-haired nostalgia buff.

A quick-and-dirty survey of the festival's audience showed a majority running to the 40s and beyond (prime-time host Robert Osborne said Classic Cruise attendees typically skew younger, with many more aged 25 to 30). Still, there was 23-year-old Amelia Eridon of Anaheim, Calif., who first attended a previous festival with her uncle, but was now back with husband Sean, also 23, “bribing him” with screenings of “Blazing Saddles” and the original Japanese version of “Godzilla.”

Sean had recently discovered a taste for the more-sophisticated-than-he’d-expected comic tone of Fred Astaire movies, putting him firmly on track with the rest of the crowd, who “sold out” “5th Avenue Girl,” a 1939 screwball comedy starring Astaire’s iconic partner Ginger Rogers, which was brought back for a second showing.

Repeated festival attendance -- like Amelia Eridon's -- clearly shows TCM fans' allegiance to the channel, a “rare and intimate relationship that exists nowhere else,” said Mankiewicz. “I watch a lot of TV and certain programs regularly, like ‘The Americans,’ but I don’t feel connected to FX as a channel,” he noted. “Our fans care about TCM’s programming decisions” -- one of which is to remain commercial-free. “We know you guys love it, and that’s never going to change!” he told festival-goers.

TCM, of course, is an anomaly: arguably the only basic cable channel that has remained ad-free, while similarly pure film networks like Sundance and IFC (and its former chief competitor, AMC, originally American Movie Classics) long ago succumbed to the lure of commercial dollars. Ironically, however, here each presentation was introduced by a TCM staffer who provided a low-key pitch for the festival's sponsors, from longtime partner Delta to Genworth, given the odd title of the "insurance agent of the TCM Classic Film Festival."

The channel was able to start off commercial-free in 1994 because “we owned the product,” said Osborne. When first launched, the programming was “90% to 95% the Turner film library,” said Tavish. As the company branched out, it developed relationships with all the major film studios and independent film distributors, for a “little more adventurous mix” meant to “look at different parts of film history,” he added.

As programmer, Tavish said his greatest pleasure “is when somebody who’s really hardcore says he was introduced to a movie he never saw before, and really loved it.”

I'm not hardcore, but as a screwball comedy devotee, I most enjoyed discovering “5th Avenue Girl,” which combined social commentary with comedy 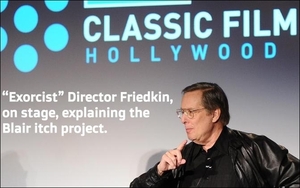 the same way its director, Gregory La Cava, did with his more well-known “My Man Godfrey."

A less felicitious discovery was the 1977 “Sorcerer,” marred by over-the-top violence and excruciatingly detailed semi-action sequences. It would have been awkward to leave the theater, though, because the audience included its director, Friedkin, who had earlier said this was the one movie he’d made that he wouldn’t change a frame of.

So she got the part.