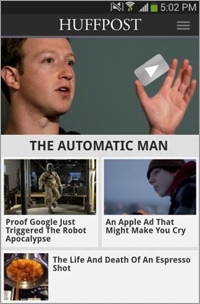 The in-stream ads are designed to mirror the look and feel of a property’s editorial content on mobile screens, but are labeled as “sponsored.” While initially aimed at publishers and developers to promote their apps, the format will eventually extend to other types of advertisers.

“We think there’s probably a better way to advertise to people than a rectangular ad box at the bottom of a smartphone page,” said Chad Gallagher, director of mobile at AOL Platforms. “This is the first launch for native in AOL platforms, on a global, open basis, to solve that problem.”

In initial testing over the last four months, Gallagher said the native unit has had about the same click-through rate as traditional mobile banners. The difference has been in post-click conversion rates, with the native ads delivering rates of 6% to 8% compared to 1% to 2% for banners.

“Fundamentally, users just engage in a much more significant way when the advertising is more in line with the content they’re consuming,” said Gallagher.

Once they get past the click, that is. Early campaigns with more than 50 app developers on AOL sites like Autoblog and DailyFinance have also shown higher revenue per thousand impressions (RPMs).

That’s a result of the higher post-click conversion rates the ads drive, according to AOL.

AOL says the new ad format at launch has a reach of 86 million monthly users (per comScore data), but how often users see ads isn’t standardized. That will be left up to individual content properties and publishers, Gallagher said. “Even on our own sites, we haven’t figured out the right ratio,” he noted.

The ads initially will typically be sold on a cost-per-click (CPC) basis, but a cost-per-download model is also an option. In the coming months, AOL expects to expand the native offering beyond app promotion to advertisers across industry categories in the coming months. Gallagher said AOL is already hearing from “tons of brands” about taking advantage of the technology.

By starting with app download ads, AOL clearly hoping to emulate the success of Facebook’s app install ads, which reportedly account for more than half the social network’s mobile ad sales. More recently, other major Internet players like Yahoo, Twitter and Google have debuted their own units for driving app downloads.

Like Yahoo, AOL hasn’t been able to capitalize on the huge growth in mobile usage and advertising in the last few years. While Google accounted for an estimated 41% of U.S. mobile ad sales in 2013, and Facebook 15.8%, according to eMarketer, AOL is simply among “other” sites that represented about a third of ad sales last year.

Gallagher noted that while AOL is adding a native mobile format, it isn’t getting rid of existing banner and rich media formats like Pictela for devices. “That’s not going away,” he said. During the company’s most recent earnings call, AOL CEO Tim Armstrong said mobile had contributed to its quarterly ad gains.