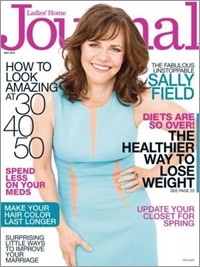 It’s the end of an era: on Thursday Meredith Corp. announced that Ladies’ Home Journal will cease publication as a regular stand-alone magazine after 131 years, during which time it attained iconic status as a guide and reference for all domestic topics. The magazine’s entire editorial staff will be laid off.

The monthly subscription edition of the magazine is folding. It will continue to be published as a quarterly, newsstand-only magazine.

The announcement was made with little fanfare as part of the company’s first-quarter earnings results, when Meredith Chairman and CEO Stephen M. Lacy revealed that the company is in the midst of “transitioning Ladies’ Home Journal to a special interest publication,” halting subscription sales in favor of periodic newsstand-only issues.

LHJ’s July issue will be its last as a regular publication, after which current subscribers will receive other domestic titles, like Better Homes & Gardens, in its place.

The LHJ Web site may continue operations, like a number of other magazines whose print editions folded in recent years, but it will clearly have to draw on other editorial staff within Meredith.

According to the most recent figures from Meredith, the median age of LHJ’s readers is 57.9, compared to a median age of 35.9 for U.S. females, and individuals ages 35+ constituted 92.8% of the total readership.

Still, the magazine had a circulation of 3.2 million, suggesting it retained a substantial following among older female readers. But the advertising situation was dire. According to the most recent figures from the Publishers Information Bureau, LHJ saw total ad pages fall 22% from 112 in the first quarter of 2013 to 87 in the first quarter of 2014.

Taking a longer view, the first-quarter figures for this year are down a vertiginous 74% from a peak value of 336 in the first quarter of 2006, also per PIB.

With no end in sight for print-advertising declines, it wouldn’t be surprising if LHJ were joined by some other big-name casualties in the not-too-distant future.