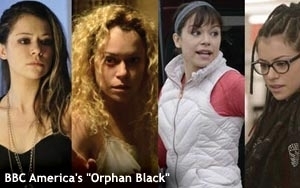 The best news about television today comes from BBC America, which this morning issued a press release declaring that the audience for last weekend’s season premiere of the science-fiction thriller “Orphan Black” effectively doubled once live + 3 ratings were finalized.

Including ratings for three replays last weekend, which is one of the benefits of basic cable scheduling and audience measurement, the total audience for the “Black” season premiere now stands at 1,577,000. That gives you an idea of how slight its same-day ratings were, especially for a show with as much critical support and media buzz as this one.

Those numbers still aren’t great -- they are, in fact, nowhere near the audience this amazing show deserves -- but they aren’t at all bad for BBC America. According to the network, they are strong enough to make “Black” the returning drama with the biggest boost from its live +3 numbers for its season premiere in the 2013/14 season to date.

Again, that may not be all that remarkable an accomplishment, but it means a lot for “Orphan Black” and BBC America, just as it would for hundreds of shows on dozens of basic cable networks. Furthermore, low numbers for any series on a Saturday night are to be expected. I wonder what kind of a boost “Black” might get if it were moved to another night of the week. Surely it would get lost among the competition on Sunday night, as the interesting period police drama “Copper” did during its two-season run, but there are five others from which to choose.

I wouldn’t normally make so big a deal over a press release trumpeting a show’s live +3 numbers because every show experiences some manner of improvement when DVR usage is measured. It’s rather like someone celebrating because something has “blown up” on Twitter. It’s almost ordinary.

But I’m only too happy to show some love for whatever reason for “Orphan Black,” which in addition to being a damn fine character-based sci-fi thriller with more twists and turns than just about any other series on television is a grand showcase for the profound talents of its lead actress, Tatiana Maslany. In a tour-de-force collective performance (or collection of performances) she plays several physically identical and yet highly distinctive clones (as of the first season and the start of the second I believe the clone count stands at 11 -- eight that have been featured on the show and three others that haven’t been seen and may be dead, though on this show one never knows). Maslany somehow makes it easy to identify each and every one of them from the others, even when two or more of them play against each other in one scene, or when one of them pretends to be another. More often than not the emotional undercurrents in the stories of each of these women are exceptionally strong; the fact that Maslany accomplishes this while acting opposite a double -- or at times, against nothing but thin air -- makes her work all the more impressive.

Maslany last year received a Critics Choice Award from the Broadcast Television Journalists Association and a TCA Award from the Television Critics Association. She was nominated for a People’s Choice Award and a Golden Globe Award. Shockingly, she was not even nominated for an Emmy Award. The series itself was recently honored with a Peabody Award.