Showtime's 'Nurse Jackie' Dares To Go There in Season Six 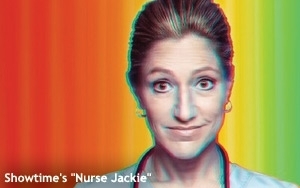 When Edie Falco won the Emmy four years ago as Outstanding Lead Actress in a Comedy Series for her starring role in Showtime’s “Nurse Jackie,” she took to the stage and with a look of sheer disbelief on her face told the audience that she wasn’t funny. In other words, she was somewhat stunned to be honored with an award in a comedy category for a performance that was unarguably dramatic.

Her confusion was easy to understand; Jackie Peyton, the drug-addicted nurse, wife and mother she portrays on “Nurse Jackie,” is many things -- smart, conniving, compassionate, calculating, selfless, selfish, brave, bold, fearful -- but she isn’t comical. Falco certainly tempers the often exasperating Jackie with a dark sense of humor, but it is generally buried several layers below the surface of her confounding persona. Certain characters and story lines on the show are often amusing, but everything about Jackie is deeply disturbing and profoundly sad.

The show continues to ask the question “How can someone so good be so bad?” Jackie is easily the most skilled and giving nurse in the emergency room at All Saints Hospital, the fictional New York City medical facility in which much of the series is set. And yet, she continually abuses drugs and lies to family, friends and colleagues about it, and has often treated patients (and sometimes saved their lives) while under the influence.

Even her stay in rehab two seasons ago didn’t help. Jackie remained sober for a while, until she blithely popped a pill and began abusing drugs all over again.

We’re only a few episodes into the show’s powerful sixth season -- which I recently watched in its entirety, because Showtime supplied all twelve episodes to critics. In the interest of not spoiling anything, I won’t go into very much detail about it. (If you don’t want even a hint of what’s to come, skip the next few sentences.) All I will say is that nothing Jackie has done in previous seasons to score drugs or hide her bad behavior comes close to the places she goes this time around. Forget about her own well-being; nobody around her is safe. Fortunately, the severe consequences to come are as intense for Jackie as her actions are atrocious.

Falco’s performance remains an award-worthy marvel throughout. It may likely be the finest and most nuanced depiction of a functioning addict ever seen on American television. For Jackie there are no easy outs or quick solutions to her drug problem, as is so often the case on prime time and daytime dramas that explore similar territory. There is nothing easy for viewers, either: The most convenient response this season is to feel a growing sense of disgust or even hatred for this dangerously conniving person. But Falco (and the “Nurse Jackie” writing team) don’t allow for one-sided reactions. Now and then and when least expected we see the real Jackie as a person trapped by the influences of her disease. Watching Jackie fight her demons, and watching those demons win time and time again, I found myself thinking of Linda Blair’s character in “The Exorcist.”

Also worth noting about this show is that Merritt Wever, the surprise winner last year of the Emmy Award for Outstanding Supporting Actress in a Comedy Series for her role as daffy and dedicated Nurse Zoe Barkow, makes clear this season that she deserved that honor and should be a serious contender for the same recognition in 2014.

“Nurse Jackie” isn’t the only heavily dramatic series on Showtime that is classified as a comedy. The same is true of “Shameless,” which just completed its fourth season, one that can only be described as frequently harrowing and horrific. As on “Jackie,” the main character on this show -- Fiona Gallagher, a young woman who has been asked to shoulder a bigger burden than anyone her age should ever have to carry -- suffers an increasing dependency on substance abuse, in this case cocaine. The results this season were devastating to Fiona, who landed in prison, and her youngest sibling Liam, who playfully ingested cocaine that Fiona had carelessly left within his reach and may have suffered brain damage as a result.

Meanwhile, Fiona’s unfailingly detestable father -- a drug addict and alcoholic -- dramatically deteriorated throughout much of the season while waiting for a liver transplant.

This show is now in contention opposite “The Big Bang Theory,” “Modern Family,” “Veep” and other reliably hilarious sitcoms for nominations in comedy categories from the Broadcast Television Journalists Association, the Television Critics Association and the Academy of Television Arts & Sciences. Certainly Emmy Rossum, who portrays Fiona, deserves some kind of recognition for her performance -- as does Falco for her work in “Nurse Jackie.” But the idea that they will be up against actresses such as Allison Janney and Anna Faris of CBS’ “Mom” who are playing truly funny characters in shows that generate big laughs seems somewhat absurd.

Interestingly, Janney and Faris also play addicts, albeit in recovery. Does that make comedies about the consequences of drug abuse a trend? If so it’s worth wondering about, and paying attention to.