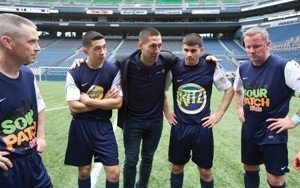 Having announced multi-brand sponsorships with major North American soccer teams, organizations and players last fall, Mondelez International has unveiled the umbrella campaign, dubbed #PassTheLove, and begun rolling out some of the numerous implementations.

The massive soccer marketing program will also be among the first to benefit from Mondelez's newly announced real-time video-production capabilities, developed through a partnership with video news supplier NowThisNews.

Mondelez has created its own video news operation, called Blink Studios, manned by brand team members, within NowThisNews' New York studio. The brand staff will have access to NowThisNews' creative and production teams, equipment and capabilities.

In the case of the soccer campaign, real-time video will enhance adaptive advertising  (one of many components in the campaign; see below).

"Pass The Love is one of our most engaging and sharable campaigns to date, and it will include adaptive digital advertising, as well being one of the first to participate in Mondelez International’s most recent real-time digital innovation, Blink Studios," Stephen Chriss, senior director, North America consumer engagement and marketing services at Mondelez, tells Marketing Daily.  The campaign "will be operationalized in a new-wave digital news room allowing the key brands involved to plug into the daily news rhythm and react in real-time with engaging, relevant, creative and newsworthy video content," Chriss confirms.

Mondelez's soccer deals include a three-year sponsorship as the official snacks of U.S. Soccer (men’s and women’s national teams); and a three-year sponsorship as the official snacks of Club Deportivo Guadalajara (a Mexican team commonly known as Chivas) for games played within the U.S. The official snacks designations for U.S. Soccer and Chivas extend across the cookie, candy, cracker and gum categories, and will include Mondelez brands Oreo, Chips Ahoy, Ritz, Wheat Thins, Honey Maid, Newtons, Belvita, Trident, Dentyne, Stride and Sour Patch Kids, among others.

The overall goals of #PassTheLove are to engage and reward consumers as they celebrate all aspects of soccer — the rituals and anthems, as well as the games themselves.

“This isn’t about the X’s and O’s of the games, it’s about inspiring people to #PassTheLove by sharing the personal connection they have with the sport, whether they’re cheering from the stands, watching at home or playing the sport themselves,” Chriss said in announcing the campaign.

Mondelez brands (literally) kicked off the campaign on April 23 in Seattle, by having two of the U.S. Soccer stars with whom it now has brand ambassador deals, Alex Morgan and Clint Dempsey, act as (surprise) volunteer coaches during a game played by a local intramural team made up of veterans.

Photos of that "Game of Your Life" event are currently featured in a gallery on the #PassTheLove campaign site, which is also featuring a "Game of Your Life" contest. Fans who share photos and essays about why they love soccer earn chances to win prizes that include a grand prize of a community "soccer game experience event," nine cash prizes of $10,000, and instant giveaways.

Other elements of the campaign:

*An interactive “Free Kick Fury” game on the smartphone messenger Kik. Users can compete in penalty kicks with the soccer star ambassadors. The game has a “Pactivation” overlay allowing consumers to redeem upgrades found on more than 2 million on-pack codes.

*#PassTheLove promotions are being featured on more than 17,000 in-store displays at retailers across the country.