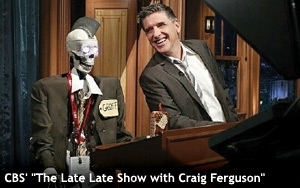 Craig Ferguson announced during the taping of last night's edition of CBS’ “The Late Late Show” that he will leave the program in December, reigniting the media's favorite TV guessing game: Who will be the next person to enter the broadcasters' late-night arena, and will that person be another middle-aged white guy in a suit?

I have the feeling we will have our answers before too long -- quite likely before CBS's upfront presentation in two weeks.

In the meantime, let's keep the speculation to a minimum. And pay no attention to the endless ruminating over whether or not Ferguson is leaving because the network didn't offer him Letterman's spot. Last night he revealed that he began to consider leaving the show about two years ago. “This is my decision to go,” he convincingly explained. “This is not Jay and Conan at NBC. This is not Dave and Jay all those years ago. Now, you will read that in areas of the internet where truth is of absolutely no interest. And you will read that in the informed entertainment press, where truth is of absolutely no interest, but in bigger words. It is my decision to leave. CBS has been great with me.”

Honestly, everyone is still spinning from the brief, but ferocious speculation that filled the recent week between David Letterman's announcement that he will retire from CBS’ “The Late Show” in May 2015 and the network's decision to bring Stephen Colbert on board as host. Curiously, the news that Colbert will be leaving Comedy Central sometime during the next year does not seem to have ignited a similar frenzy of informed guessing as to whom might take his place in the time period following “The Daily Show with Jon Stewart,” one of the most popular programs on basic cable television and one with a shelf full of Emmy Awards.

CBS went with a safe choice in Colbert, who very comfortably fits the historic description of a late-night broadcast host. Most impressively, the network wasted no time in identifying him as its upcoming late night star. One can only imagine who might be taking Ferguson's place come January, or if CBS will even continue with a second late-night talk show. Might there be more interesting programming options for the post-“Late Show” spot? If not, will CBS become the first broadcast network to boldly position an entertainer who is not a middle-aged white guy in a suit in a coveted late-night slot since Fox famously hired Joan Rivers away from her gig as permanent guest host for Johnny Carson in 1986 and gave her a late-night talk show of her own? Will whoever might have been CBS' second or third choice to take Letterman's place now receive a show of his or her own? Will the network boldly go with a relative unknown and let that person slowly develop into one of tomorrow's superstars?

Regardless, as of January, I think CBS may have to show a little more love for "The Late Late Show" -- or whatever takes its place -- than it has in the past. Given all the excitement over at NBC, viewers have come to expect more from life at 12:30 a.m. Ferguson was fine, as were the fondly remembered Tom Snyder and Craig Kilborn before him, but nothing in that time period has ever been as carefully cared for and supported as “Late Night” over on NBC throughout its distinguished, star-making history.

The departure of the effortlessly witty Ferguson is a significant loss for CBS and for broadcast in general. He has been the most distinctive host in late night for many years -- and not simply because he's the only one who has shared his stage with a chatty gay skeleton and a happy horse rather than a sidekick and a house band, which alone sets him apart from the rest.

Whatever Ferguson decides to do, his work many years ago on “The Drew Carey Show” and his recent recurring role on TV Land’s wickedly funny “Hot in Cleveland” have made clear that he has a promising future as a comic actor should he choose to head back in that direction.