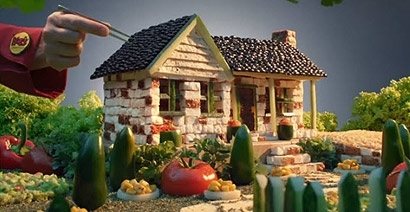 After running a national TV ad test for a short time last year, Moe's invested in a "significant" national cable buy for a new 30-second ad that launched last week, and will run through May 18, reports CMO Paul Macaluso. The brand will also run an ad for a new, limited-time burrito offering on national cable networks this September.

Last year, Moe's opened 54 new restaurants (including a milestone 500th location in Manhattan), signed 155 new franchise deals, and realized 12% growth in system-wide sales (to $526 million) and 4.5% growth in same-store sales. It currently has about 540 locations, and will add nearly 100 more this year alone, including the start of a West Coast expansion (through an 18-unit franchise agreement in Northern California). The chain's goal is 850 locations by 2015, according to its site.

"We're at a tipping point, transitioning from a regional to national brand," says Macaluso, and national TV is now a cost-efficient means of building awareness in new markets for the still-young brand, founded in Atlanta in 2000.

National TV represents two-thirds of Moe's' 2014 marketing budget, which has been increased overall to support the chain's expansion. "We're doing more of everything," Macaluso says.

The new national TV spot is being supported by a large digital media buy, including display banners and online video (such as pre-roll on YouTube, Funny or Die and other sites). In the social arena, promoted tweets are currently being employed to drive awareness of the chain's special offerings on "Cinco de Moe's" day, and these are being "contextualized" to the media buys for the TV ad, Macaluso reports. Among other efforts, Moe's is also running interstitials and animated banners on mobile for Cinco de Moe's, and its SEO efforts are ongoing, he adds.

The new national TV ad, for Moe's signature "Homewrecker" burrito, showcases the chain's fresh, made-to-order food (it focuses on all-natural and sustainable ingredients, and offers many vegetarian, gluten-free and lower-calorie options) and it's fun, friendly brand personality (other menu staples have names like the Art Vandalay burrito and the Close Talker salad, and the staff cheers "Welcome to Moe's!" as customers enter).

The ad shows a Moe's chef creating a house and surrounding foodscape by using many of Moe's 20 fresh ingredients. The house is then destroyed by a wrecking ball made out of an avocado. Voiceover: "We build it, you demolish it. The legendary Homewrecker burrito."

Moe's Southwest Grill is owned by Focus Brands, which in turn is owned by the private-equity Roark Capital Group. Other restaurant franchise brands under the Focus Brands umbrella include Auntie Anne's, Schlotzsky's, Carvel and Cinnabon.