Acura Back For Coffee Refill With Seinfeld 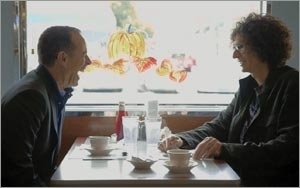 One KPI for a branded-content play is the most obvious one: views and kudos. Acura has certainly gotten that for backing the online series "Comedians in Cars Getting Coffee," which launched two years ago. Acura is back as sole sponsor of the Jerry Seinfeld-hosted interview format/comic riff on buddy road films.

In the show, Seinfeld reviews the episode's featured wheels -- his or other peoples -- picks up a celeb, and the two drive around gabbing. They either drink coffee in the car or head to a cafe. Alec Baldwin, Chris Rock, David Letterman (driving around with Seinfeld in an old Volvo), Mel Brooks, and Louis CK have been passengers. Seinfeld is executive producer, with nuts and bolts production handled by Sony Pictures Television's Embassy Row.

The deal means Acura, which has backed the show exclusively for the past three seasons, will fund the production for four more seasons, or 24 new episodes. The series lives on Sony's online Crackle network. Artists Agency (CAA) intermediated between Acura and Seinfeld, who has only appeared in an Acura TV spot during Super Bowl XLVI touting the return of the NSX super car.

The four-season extension begins after two more runs of the show, which are this summer and this fall, per Acura. According to the partners, the show has been watched about 40 million times and has also gotten digital-content awards.

Acura's visibility is via native -- ergo, humorous -- bookend ads with the occasionally sober one. One touts the RLX sedan by making fun of Ricardo Montalban-esque car ads from the past, with a guy in a suit and a woman in an evening gown and some wordplay about how to describe the interior color, though no mention of “soft, Corinthian leather.”

On the traditional ad side, Acura has been handled since last year by Mullen, which raised the curtain on its idea for the brand last year with the brand's most expensive effort ever, which introduced the tag, "Made for Mankind." It also expanded the brand's media palette, with work on all screens, including mobile.