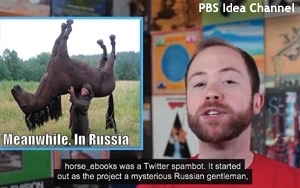 PBS is best known for its signature TV programs like “Masterpiece Theater,” “Great Performances,” “Nova,” and “Charlie Rose.” But about two years ago, it began creating original Web-only series as well. It now boasts more than 30 shows streamed 5 million times a month by more than 1 million subscribers.

Among the most popular shows are the “Idea Channel,” which looks at connections between technology, pop culture and art, and “Blank on Blank,” in which “lost” interviews with famous people are brought to life with animation, music and sharp editing.

During the NewFronts next week, PBS will unveil new series to its lineup. For the first time, it will make a pitch for sponsorships. “This really is an extension of PBS’ long history of public-private funding of our content,” said Matt Graham, senior director of PBS Digital Studios. “So we see this as really being the same thing we’ve done in broadcast for a long time.”

That means forging relationships with brands that consider it important to support PBS content. “We’re really just looking forward to opening up those conversations,” said Graham. Given that the the world of original Web content is still a bit of the Wild West, he believes the PBS brand can give potential sponsors a safe way to play in the market.

Graham declined to give a minimum figure that PBS is looking at in selling sponsorships. Shows already carry advertising in the form of pre-roll spots that YouTube runs against inventory across the site. “PBS is this incredibly trusted brand, and we’ve figured out how to translate that brand into content that people love online. We think we’re a great partner, if you’re looking to reach online audiences,” said Graham.

He notes that the network’s Web audience tends to skew younger, with the average in the 24-45 age range, but shows like Idea Channel are especially strong with teen viewers. What would a sponsorship with PBS Digital Studios look like? PBS does not offer any specifics, suggesting it’s a matter of working with individual brands to craft the right approach.

With regard to the network’s new shows, Graham was also tight-lipped, but indicated some would fall into the popular YouTube category of video blogs, or vlogs, while others would take entirely novel approaches to the video format, like Blank on Blank.

In addition to the Web, PBS is now also distributing a selection of its video programs through over-the-top (OTT) set-top boxes like Apple TV and Roku as well as Microsoft’s Xbox. But so far, it hasn’t focused on cross-promoting original Web shows on the broadcast network. “We’ve done some experiments, but there’s a lot more for us to do,” he noted.