Foursquare Killing Check-In To Save Itself 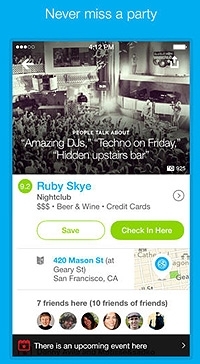 Foursquare is ditching the check-in. About time. The company on Thursday announced launching a new app called Swarm for finding friends nearby, while the core Foursquare app would focus on providing recommendations.

“Our two new, unbundled apps are designed to do that for everyone. Swarm is for people who want the fastest and easiest way to connect with their friends. Foursquare is for explorers who want to know about the best spots, and to share what they’ve found with others,” is how Foursquare explained it in a blog post.

In other words, Foursquare is pushing the check-in over to Swarm so the Foursquare app can function purely as a local search and recommendations tool that competes more directly with Yelp and other discovery-focused apps. That’s a move the company should have made some time ago as the novelty of the check-in has long since worn off.

“Listen -- the point of the company, this whole thing, was never to build an awesome check-in button,” Foursquare CEO Dennis Crowley told The Verge. But it became the app’s signature feature while helping Foursquare amass data on nearby venues. Now it has location data from 6 billion check-ins, and combined with other types of information, the company says it can make a very accurate guess about where you are.

While Foursquare has taken steps more recently to shift away from the check-in, it still remains front and center in the app. That creates a hurdle for people who just want to use the app for search and discovery, like a speed bump in the middle of the screen.

Recognizing that problem is part of what’s behind the “unbundling” into two apps.

When the updated Foursquare app arrives this summer, the company is promising a “metamorphosis.” “We believe local search should be personalized to your tastes and informed by the people you trust. The opinions of actual experts should matter, not just strangers,” the company stated. That last bit sounds like a dig at Yelp.

In contrast to Yelp’s user-generated reviews and ratings, Foursquare aims to offer more tailored recommendations based on where you or friends have been. But people still seem to find Yelp’s huge collection of crowdsourced data useful. Yelp this week reported net revenue grew by two-thirds from a year ago and it has a market valuation of $4.6 billion.

Even so, chucking the check-in is a smart -- if overdue -- step for Foursquare to attract more users and, potentially, more ad dollars from local businesses. Citing unnamed sources, The Verge reported that Foursquare is on track to make $40 million to $50 million this year, up from $13 million last year, and just $2 million in 2012.

That's just a projection, of course. A Fast Company report last year suggested Foursquare was on track to generate $15 to $20 million last year, which means it fell short of that range, if The Verge figure for last year is accurate.

Foursquare last fall rolled out self-serve ads for small businesses, which are presumably contributing to the four-fold growth projection. Unlike Yelp, Foursquare isn’t a public company, making it harder to gauge its progress as an ad-supported business.