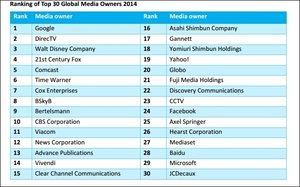 They join Brazil’s Globo as the only Top Thirty based in “emerging markets.”

Otherwise, the list looks like what you might expect, with Google on top -- by a wide margin -- as the world’s largest media owner. In fact, ZO estimates Google’s revenues are 47% higher than the second-ranked company on the list, U.S. satellite TV operator DirecTV.

“Google’s core search function has benefited from the rapid rise in search volumes from smartphones and tablets,” the ZO report notes, adding: “Among the rest of the top five, DirecTV remains in second place and Comcast remains in fifth. Disney has overtaken News Corp. to take third place, after News Corp. split into two separate operations. One of these -- 21st Century Fox -- comes fourth in our ranking, while the new News Corp. is in twelfth place.”

Cox Enterprises moved up from eighth place last year to seventh this year, and the U.K.’s BSkyB rose from tenth to eighth, while Germany’s Bertelsmann slipped from seventh to ninth, and CBS Corp. dropped from ninth to tenth.

The report, which was launched in 2007, defines media revenue as all revenue deriving from businesses that support advertising, not just the advertising revenue itself.