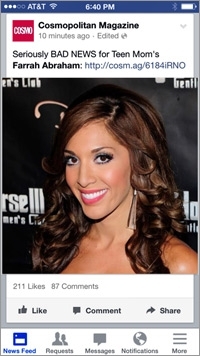 For a company that didn’t seem to have anything but a hapless mobile strategy two years ago when it IPO-ed, Facebook’s post-PC story is among the great turnaround tales in recent digital history. Remember when we were poring over those pre-IPO SEC filings that revealed the weak underbelly of the company clearly was in devices?

Well, the company not only rocket-fueled their revenues in the direction of mobile in a hurry -- now it looks as if the basic changes in use cases and modes for mobile will naturally favor the social channels. According to an upcoming report from Quantcast, almost a quarter (24%) of referrals to the top 250 major mobile news and entertainment destinations come from Facebook. Using its Quantcast Measure platform, the company analyzed traffic to the top 250 publishers and found Facebook outdistancing all other social media sources combined. The metrics reflect the full 12 months of activity ending in January.

Twitter accounted for only 7% of referrals, with Pinterest at 2%. Notably, the beleaguered and perhaps foundering Google+ didn’t even make the chart. Social clearly is becoming the major source of content discovery -- an important shift from the search-centric desktop that could also help fuel social commerce going forward.

It gets better for Facebook because so many of referrals to third-party sites are keeping the user in the Facebook environs. Quantcast also found that because of this level of activity from Facebook links, the Facebook in-app browser is itself the most popular third-party browser on iOS. Indeed, its 12% of all page views for the top publishers puts it well ahead of Google Chrome (4%) and Twitter’s in-app browser (2%).

At least in the news and entertainment category, I expect much less so for retail and services, social has surpassed search on mobile as the leading source of referrals. This is a striking reversal of polarity from online, where Facebook has been struggling to convince major media that it is a reliable partner in driving traffic to their sites.

It is important to distinguish discovery on mobile from the same model on the Web. I guess that the kind of content “discovery” that is occurring via social channels is more opportunistic and serendipitous than deliberate and task-driven. I am not sure that people are using Facebook to look for news or to serve as any kind of news filter. On the other hand, I think we do rely on social feeds like digg, reddit and BuzzFeed as news filters/sources -- and yet none of these socially driven channels are mentioned by Quantcast. Still the full report on mobile and content discovery is yet to be released. But clearly a combination of app ecosystem restraints, multitasking and screen limitations and differences in user mode all point to very different routes to content discovery on devices than on the desktop. The simple fact that we are spending so much of our time -- over 80% by some measures-- in apps precludes the use of general search and tends to verticalize discovery.

Did I get through this entire column without mentioning that Google has to be troubled by this sort of metric?

Oh, no -- wait. Let me translate it into social feed link bait for you: “Here Is Why Google Will Be So Screwed On Mobile.”