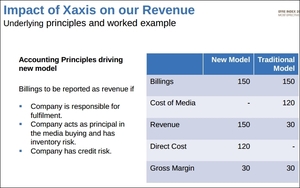 May 8, 2014 -- Some people swear they could feel an almost imperceptible disturbance in the media universe at just about 8:12 p.m. (ET) when Publicis announced an annulment of equals. No, it wasn't a reverberation caused by the simultaneous shaking of fists at Omnicom's offices because Publicis had beaten it to the punchline (Omnicom's release came out five minutes later, but I'm sure that was negotiated as part of the terms of their ill-fated “merger of equals”). It was actually the collective, simultaneous releasing of breath from WPP offices in London and New York as the world's biggest media buyers -- and traders -- were reassured that they would remain No. 1, at least for the foreseeable future.

But while Wall Street and Madison Avenue had their eyes diverted to the center ring -- the spectacle surrounding Publicis and Omnicom -- some clever new mathematics developed by the Math Men at WPP went largely unnoticed.

Specifically, WPP changed the accounting methods it uses to bookkeep its agency trading desk Xaxis that has the potential to change the way it is perceived -- and valued -- on Wall Street, if not Madison Avenue.

The whole thing might have gone completely unnoticed, if not for an insightful research note from BMO Capital Markets analyst Daniel Salmon, who explains the Xaxis accounting change thusly:

“Several investors have asked for background on the accounting change at Xaxis so here goes: for a full-service offering that takes inventory risk standard practice is ‘gross accounting,’ where billings/spend are accounted for as gross revenue and media/traffic acquisition costs are deducted to generate net revenue to Xaxis. This ‘take rate’ for Xaxis is functionally represented by the gross margin. This is how Xaxis will be accounted for as of now.”

Not sure exactly what that accounting lingo means? Well, Salmon offers a much more visceral explanation too: “Said another way, if WPP were to transition all of its $90 billion in media buying to programmatic tomorrow (admittedly, an absurd idea), we'd be adding about $89 billion more gross revenue to the company.”

Okay, so this is just bookkeeping, right? Maybe in a normal agency holding company, but this is WPP we're talking about, the company founded by Sir Martin Sorrell, who utilized U.K. accounting methods to essentially take over Madison Avenue -- first as the financial genius behind the Saatchi & Saatchi (now Publicis) empire, and eventually at his own shop. (You know, WPP originally stood for Wire and Plastic Products, and was basically a shell company he used to roll up some of the advertising world's most prized assets -- JWT, Y&R, Ogilvy & Mather -- partly by accounting for those assets better than his competitors).

No wonder Sorrell is famously quoted for the line: “We are Math Men, not Mad Men.” It's because there is a method to their math-ness, even if it’s not always transparent for others to see. So, if you’re like me, you’ll keep an eye on the Xaxis accounting change to see how that one floats, and what kind of value is created from it. At least one Wall Street expert says it will have the effect of giving Xaxis the same kind of valuation as sky high publicly-traded peers like Rocket Fuel and Rubicon Project.

The actual mathematics may not be transparent to us mere Mortal Men, but it is crystal clear to WPP's Math Men.