Internet Of Things To Be All Around Us In 2025 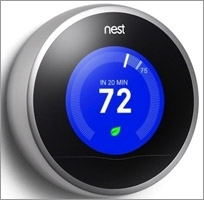 The Pew Research Center weighs in today with a new report on the topic, predicting that the Internet of Things will be a reality by 2025, with the proliferation of tech screens, wearable devices, connected appliance and environments full of sensors and cameras.

While bringing benefits, especially for health and productivity, the data-saturated world envisioned also raises significant concerns about privacy and people's ability to control their own lives. If everyday activities are monitored more minutely, the level of profiling and targeting will amplify social and economic struggles.

The findings come from a survey of 1,600 people, including some of the world's top technology experts including Vint Cerf, futurist Paul Saffo, JP Rangaswami, chief scientist for Salesforce.com, Karl Fogel, partner at Open Tech Strategies, and Hal Varian, chief economist at Google.

Those involved in the study by the Pew Center's Internet Project and Elon University's Imagining the Internet Center expect the Internet of Things to be ubiquitous.

Bodies: Many people will wear devices that connect to the Internet and give them feedback on their activities, health and fitness. They will also be able to monitor others, like children or employees, also wearing sensors.

Homes: People will be able to control everything remotely, from how residences are heated and cooled to how often their gardens are watered.

Goods and services: Factories and supply chains will have sensors and readers that more precisely track materials to speed up and smooth out the manufacturing process.

The overall view is that significant progress will be made between now and 2015 in wearable computing and The Internet of Things. Voice and touch commands will advance for computer interfaces -- but don't count on people to be walking around with chips planted in their heads.

There will also be unintended consequences, digital divides, and substantial privacy issues in a hyper-connected world. The Obama administration recently took up some of the concerns around the related area of Big Data, issuing a report that called for limits on how private companies use the avalanche of information gathered from consumers online.

“A major part of the White House report focused on how you encourage the best of what the Internet of Things might offer without so thoroughly profiling and predicting people's activities that they lose a sense of autonomy and human agency,” noted Lee Rainie, director of the Pew Internet Project, in an interview.

Finding that line will be the challenge for private companies and the government, given the doubled-edged nature of the Internet of Things highlighted by experts. Improvements in health, safety and convenience will come at the price of massive data collection.

Could it all lead to massive backlash? “It has been consistent and striking during all the years that we've done privacy research that Americans generally express anxiety about the trends, but don't really exhibit a backlash,” said Rainie.

Tech experts also suggested that privacy solutions could emerge like “personal anti-video firewalls” to protect users from being surveilled, and personal “Clouds of Things” that let people set terms for engaging with the Internet of Things.

Excerpted comments from individual experts can be found within the report.