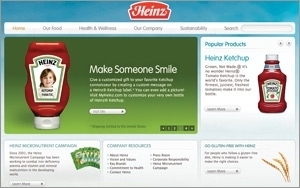 Food and condiments marketer H.J. Heinz has split its global media agency assignment between IPG Mediabrands and Omnicom Media Group, according to sources.

The company spends around $250 million a year on ads globally in the U.S., accounting for about 25% of that total or around $60 million.

In its 2012 10-K filing with the Securities & Exchange Commission, Heinz reported total advertising expenses (including production and communication costs) in 2012 of $442 million, up from about $370 million in 2011.

IPG is said to have been awarded the U.S. portion of the account, while OMG will handle duties in all regions outside the U.S., per sources.

The U.S. media-buying incumbent was Cramer-Krasselt, which had handled the assignment since 2012. Dentsu Aegis Network was the incumbent in most non-U.S. territories.

Heinz positions itself as the company that offers “Good Food Every Day.” In addition to its flagship ketchup brand, it distributes sauces, soups, beans, pasta and infant foods (representing over one-third of Heinz’s total sales) under the Heinz umbrella, as well as Ore-Ida potato products, Weight Watchers, Smart Ones, T.G.I. Friday’s snacks, and Plasmon infant nutrition.