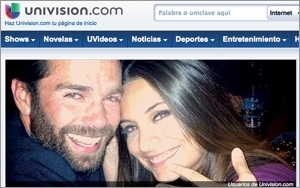 First, Univision is introducing a number of new telenovelas this fall, including “La Gata” (“The Cat”) and “Hasta El Fin Del Mundo” (“Until the End of the World”). Two more are scheduled to debut later in the season: “Mi Corazon Es Tuyo” (“My Heart Is Yours”) and “La Malquerida” (“The Unloved One”).

The telenovelas will be available on digital platforms as well as broadcast.

Univision also touted its new cable channels targeting Hispanic millennials with English-language content with a Hispanic flavor, including El Rey, created in collaboration with director Robert Rodriguez; Fusion, a collaboration with ABC; and Flama, an over-the-top network. Among the announcements were second seasons for El Rey’s “From Dusk Till Dawn Series,” “Matador,” “Lucha” and “The Directors Chair.”

On the digital front, Univision trumpeted the recent launch of a “digital-first” production studio, La Fabrica UCI, first announced in February of this year. It will create both English and Spanish-language content for distribution across all Univision’s digital platforms.