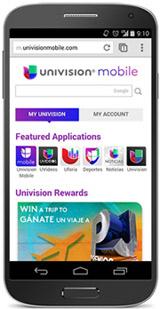 With both growing influence in the marketplace and growing mobile communications usage for everything, Univision and T-Mobile are teaming up to create a new mobile brand targeted directly at the Hispanic American market.

“We are a trusted brand for 56 million Hispanics,” Rick Alessandri, evp of enterprise development for Univision, tells Marketing Daily. “As we look to extend our brand to the community, we’re looking for more touch points.”

The product, which will be available in 1,600 Wal-Mart stores as well as 6,000 independent dealers, will leverage Univision’s rewards program and portal, as well as access to tailor-made content, events and apps to appeal to the Hispanic community.

“When a consumer sees that Univision [logo], there’s an immediate awareness of what that means,” Alessandri says. “For this audience, there’s nothing more critical than their handset and communications devices, and this puts Univision literally in their hands.”

The brand and plans were created “from the ground up” with the Hispanic consumer in mind, says Gustavo Pena, T-Mobile’s marketing lead for Univision Mobile. The no-contract services will include nationwide talk and text (or talk, text and web) at set price points, as well as international calling features, in addition to the exclusive Univision access. (T-Mobile will continue to target second-generation and more English-speaking Hispanic consumers under its T-Mobile brand, Pena says.)

“One of the things that’s hard to get in a pre-paid market is trust,” Pena says. “There’s a lot of products on the market, but there’s questions about the quality in terms of network service and dropped calls.”