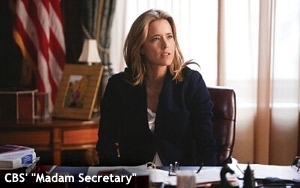 At first look it may appear that the fall schedule CBS announced this week looks remarkably stable, with familiar franchises every night of the week. But closer inspection reveals that the network will actually make changes on six of its seven nights. (The exception is Saturday, which no longer counts.) Further, five of those six nights will include a new series in their lineups.

So does this schedule reflect a network with serious performance concerns that it feels the need to address all at once? Or is this the work of smart schedulers who are making minor alterations across the board to protect and then grow potentially valuable new programs? If we were talking here about the other three networks that comprise the Big Four it would appear to be the former. But CBS is currently a rock-solid broadcaster, so the latter seems more likely.

Of course, there is a certain over-arching sameness to CBS’ fall schedule that could generate some concerns. It includes a third spinoff from the venerable “CSI: Crime Scene Investigation” titled “CSI: Cyber.” The first two spinoffs -- “CSI: Miami” and “CSI: NY” -- enjoyed long, healthy runs (especially “Miami”) but they were sprung from the mother ship when it was still a massive top-five hit. So the excitement of a “CSI” spinoff that instantly boosted those two likely won't be there for the new one. In that respect, “Cyber” will have to work even harder than did “Miami” or “NY” to get noticed.

Conversely, the American (and for that matter, the global) television audience at present can’t seem to get enough of “NCIS,” which remains as fertile as was NBC’s “Law & Order” during its peak seasons, and ripe for as many spinoffs as CBS sees fit to have spun. In other words, if there must be another spinoff the timing couldn't be better for “NCIS: New Orleans” to join the mother ship and “NCIS: Los Angeles.” (It's interesting to recall that the show that gave birth to “NCIS” and, over time, this incredibly powerful foundation franchise for CBS was “JAG,” which began life on NBC. The Peacock cancelled it, CBS picked it up and spun “NCIS” out of it and continues to reap titanic benefits from that very smart decision.)

Some will say CBS’ new schedule reflects an uninspiring sameness. Others will acknowledge a network playing to its strengths. Along those lines, the violent new thriller “Stalker” -- about detectives who investigate stalking incidents -- appears to be a perfect companion piece to “Criminal Minds,” the show it will follow. That may be because, according to CBS Entertainment chairman Nina Tassler “Stalker” creator Kevin Williamson is said to have “studied” “Criminal Minds” over the years. “Stalker” may prove to be as close to a spinoff of “Criminal Minds” as a show can be without actually being one.

Meanwhile, CBS will try a new family comedy titled “The McCarthys” after “Two and a Half Men” when the network returns to entertainment programming on Thursday nights, after its new football franchise is finished. “The McCarthys” would seem to be a better fit with “The Millers,” but everything on Thursday will be a tough call, especially come February when NBC moves “The Blacklist” onto the night. CBS also has a sophisticated and intriguing government drama in “Madam Secretary,” which looks to be a perfect bridge between “60 Minutes” and “The Good Wife,” and an interesting new action-drama about crime-fighting geniuses titled “Scorpion” that may be the network's most original new series.

Over on CBS sibling The CW, the network looks to have what may be the most likely success among all new broadcast series next fall in “The Flash.” The CW did an excellent job of launching this show, first by making it a backdoor pilot out of “Arrow,” and then by giving it one of the splashiest introductions in all of upfront week at the network’s high-energy event. “The Flash” strikes me as a show with the potential not only to succeed but to cast a halo effect over its entire network, the way “Gossip Girl” once did.

Another potential breakout for The CW -- and another of the very few new shows previewed last week that actually took me by surprise and left me anxious to see the pilot -- is “Jane the Virgin,” an adaptation of a popular Venezuelan telenovela. Like ABC’s “Ugly Betty” before it, “Jane” struck me as fun, heartfelt, passionate and above all, very distinctive -- especially during a season that promises to be all about criminals, government conspiracies, superheroes and supernatural beings. Is there an audience today for a sweet, simple show about a girl, her mother and her grandmother coping with a rather startling turn of events? I'm going to say yes.