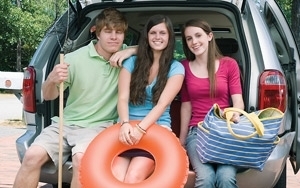 Channeling their inner Willie Nelson, it looks like plenty of Americans just can’t wait to get on the road again. New surveys from both the Automobile Association of America and the National Association of Convenience Stores are forecasting increases in summer travel and related consumer spending.

AAA Travel says it expects 36.1 million Americans will venture at least 50 miles from home this Memorial Day weekend, up 1.5% from last year, with 88% planning to drive to their long weekend getaway. This year’s prediction is 2.6% higher than the 10-year historical average, the group says, and the second-highest since 2000.

Air travel is expected to rise 2.4% to 2.6 million leisure travelers, with other modes of escape, including trains, buses and cruises, rising 6.5% to 1.7 million travelers.

“The winter blues appear to have given Americans the travel bug and a case of cruise cabin fever as travel for the holiday is expected to hit a new post-recession high,” the organization says in its release. “As the economy continues to improve at a slow and steady pace consumer spending, disposable income, consumer confidence and the employment outlook are trending up which is welcomed news for the travel industry.”

The National Association of Convenience Stores says its survey also found consumers eager to put the big chill behind them.

"We expect to see sales up at least 8% to 10% over last summer's numbers, and we will be back to pre-recession sales numbers before the end of 2014," its president says in its report. Convenience stores, which it says sell 80% of Americans’ gas, expect much of those gains to come from eager-to-travel consumers.

On average, people in its survey say they are planning two summer vacation trips of at least two nights away from home, with 84% choosing to drive.

As far as other spending, AAA says its Leisure Travel Index indicates lodging prices will rise just 2%, to an average $169 per night, with the average hotel rate for AAA Two Diamond hotels up 3% to $124 per night. Daily rental car rates are up 1% to $44, while the average airfare climbed 6% to $227.