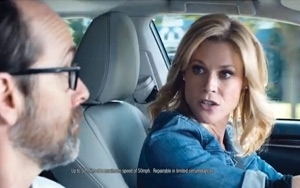 Bridgestone Americas is using a well-known actress to target women, mothers and those concerned about safety.

The debut TV spot depicts Bowen on an “everyday adventure” with a tire engineer from Bridgestone. The comedic actress, who portrays a neurotic mother on the ABC TV series, avoids the worry associated with a flat tire by equipping her car with new DriveGuard tires from Bridgestone.

“We know women are making more family purchasing decisions today, and Julie’s enthusiasm and sense of humor about life really connect with strong, smart and bold women,” said Erik Seidel, vice president of brand management, Bridgestone Americas, in a release. “Julie provides us with the perfect voice to communicate our new DriveGuard tires as a solution for safety-minded drivers who want to stay in control of their day.”

The 30-second spot “Birthday” -- in which Bowen is late taking her son to a birthday party and in her haste, not only runs over a variety of hazards, but forgets to actually take her son -- broke May 15 during the season finale of  “Grey’s Anatomy.” The campaign also includes a 15-second spot entitled “Mess With The World.” Both are scheduled to run through September.

Social media engagement with Bowen and an integrated print and marketing campaign including POP, radio and digital will support the series of broadcast ads. Bowen is also a spokesmodel for Neutrogena beauty products.

“Bridgestone’s campaign redirects the focus, and conversation, to the positive: how tires help their customers keep going in their everyday, busy, exciting lives," Melle says.