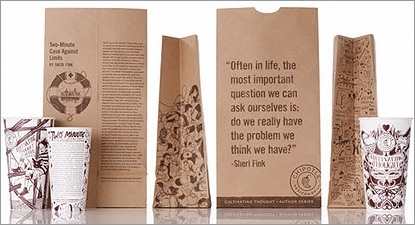 Chipotle Mexican Grill is featuring original essays from 10 authors, comedians and actors on its cups and bags.

Foer, who is curating the content, suggested the idea to Chipotle founder and co-CEO Steve Ells, after Foer had been caught with nothing to read while eating in a Chipotle one day.

“We live in a world in which there is shrinking space for literature and writing, and less time than ever for quiet reflection,” Foer said in a statement. “The idea of expanding the space and time, of creating a small pocket of thoughtfulness right in the middle of the busy day, was inspiring to me — particularly given the size and diversity of the audience, which is America itself."

"The question isn't whether this is going to change the world; the question is whether this is better than having a blank bag," Foer adds in a video on the Cultivating Thought site. "In the scheme of corporate America, this is not a massive investment of any kind, but it might have really beautiful payoffs."

Chipotle said it views Cultivating Thought as an extension of the content it produces that's aimed at changing the way people think about and eat fast food.

“Packaging in fast food restaurants is typically sold to advertisers, or used to promote new limited-time menu items, but we have never used our packaging that way,” said Mark Crumpacker, chief marketing and development officer at Chipotle. “Instead, we have used it to entertain our customers using wit, humor and design. Following in that tradition, our new packaging allows customers to connect with a great selection of entertaining and thought-provoking authors they may not otherwise have encountered.”

The program is reminiscent of Starbucks' "The Way I See It" campaign, which featured inspirational quotes on its cups.