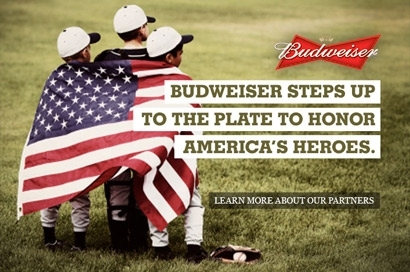 Budweiser is bringing back its patriotic red, white and blue cans and bottles just in time for Memorial Day.

The beer company is also launching an even larger commitment this year to helping military families, with Budweiser and its wholesaler partners donating more than $3 million dollars to the Folds of Honor Foundation. The effort is in its fifth year.

With each educational scholarship valued at $5,000, Budweiser and its wholesaler network’s estimated more than $3 million donation will provide more than 600 scholarships to families of soldiers killed or disabled in action.

Since first partnering with Folds of Honor Foundation in 2010, Budweiser and its wholesalers have raised nearly $10 million for military families, accounting for thousands of scholarships across the country.

The beer maker also plans to honor this year’s recipients with a series of personal scholarship deliveries via the world-famous Budweiser Clydesdales, beginning at the Patriot Cup golf tournament in Tulsa, Okla. over Memorial Day weekend, continuing on to San Diego on June 21, and then making their way across the country until they arrive at New Jersey’s Liberty Landing Marina for a special ceremony on July 4.

Budweiser also is encouraging the rest of the country to join in supporting military families with a series of Charitybuzz.com auctions. By visiting the Folds of Honor page on Charitybuzz.com/Budweiser, bids can be placed on a number of exclusive experiences from Budweiser, including a go-cart race with Kevin Harvick, a foursome at TPC Sawgrass and tickets to such events as the MLB All-Star Game, Super Bowl XLIX, the Budweiser Made in America Music Festival and the 2015 Daytona 500.

“Budweiser celebrates America and our military every single day, but this summer is especially important as we welcome thousands of troops home from overseas,” said Brian Perkins, vice president, Budweiser, in a release.