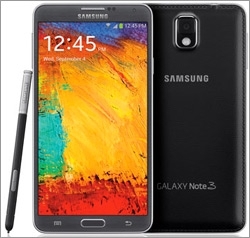 So-called phablets -- handheld devices with screens measuring diagonally between five and seven inches -- have gained increasing traction this year at the expense of tablets. An IDC report issued earlier this month attributed the 35.7% dropoff in tablet shipments in part to the rise of large-screen phones like Samsung’s Galaxy Note.

Are people using phablets in ways different than traditional smartphones or tablets? Yes, according to a new study from Opera Mediaworks, although media habits are more similar those on smaller-screen smartphones than tablets.

As on smartphones, generally, social networking is the top activity, with the category accounting for 53.8% of impressions. But it’s higher than the first-quarter average of 27.2% across all mobile devices. But while smartphone users tend to go for sports and news and information content, those areas aren’t as big with phablet users.

At the same time, tablets still dominate when it comes to activities like playing games, listening to music and watching video or consuming other media. That’s because people tend to use tablets more like laptops or TVs -- while relaxing at home, often in the evening. The peak time for phablets is in the morning from 9 a.m. to noon in the U.S.

But the Mediaworks data suggests that phablet users are more receptive to ads at night, when the click-through rate increases somewhat. The click rate on phablets also tends to be higher on phablets throughout the day than on tablets, at about 0.9% versus 0.15%. Phablet traffic falls off significantly between 5 p.m. and 7 p.m., when people are commuting or home having dinner with their families.

The study was based on data over a 24-hour period from Opera’s mobile ad platform that serves 64 billion impressions a month, reaching 500 million users through 14,000 mobile sites and apps. It looked specifically at activity on 13 phablet devices including the Galaxy Note, the LG Optimus Pro, HTC One Max, Nokia Lumia and the Sony Xperia Z.

Phablets accounted for just 20 million of the estimated 980 million smartphones shipped in 2013, according to Juniper Research, but that number is expected to reach 120 million by 2018.