Damn you, oxymorons that make sense!

Shapiro was speaking on the “Rise Of The Robot Natives: Oxymoron Or Solution?” panel to close out OMMA Native at Internet Week New York on Monday.

Given the topic of the panel, the subject of “programmatic native” came up -- something I’ve always thought is an oxymoron in its own right. (And it's not an oxymoron I'm entirely convinced makes sense, although the panel apparently convinced a few people in the audience according to quick before and after polls.)

The panel’s moderator, Steve Carbone, managing director of digital and analytics at Mediacom, pointed out the apparent backwardness of “programmatic native” and asked the 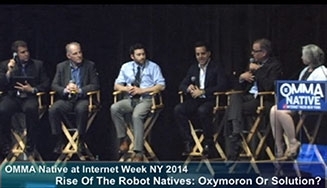 panelists if automating the entire process of delivering a native ad goes against what "native" really means at its core.

Ben Lampert, associate director of Audience on Demand at VivaKi, doesn’t think so.

“No” Lampert said, before explaining how customization can come from analytics. He argued that automation -- including analyzing data -- and customization go hand-in-hand.

Sloan Gaon, CEO of PulsePoint, agreed with Lampert. “Buying native advertising programmatically is the future,” he asserted. “It’s going to happen. What can go programmatic will go programmatic.”

Carbone challenged Lampert and Gaon a little later in the panel, asking if publishers are truly offering up “native” ad inventory for programmatic buying. Lampert said VivaKi is “seeing plenty of scale,” and Sloan said PulsePoint is “absolutely” seeing publishers offer this type of inventory via programmatic, but did acknowledge that “it’s the first inning of a nine-inning game.”