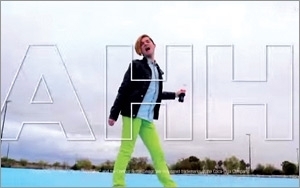 Coca-Cola will air its first TV ad exclusively featuring user-generated content during the May 21 season finale episode of "American Idol."

The spot was produced by Wieden+Kennedy from video clips submitted by teens in response to a contest Coke ran a few months ago. Teens were challenged to submit short videos of themselves showing what it feels like when they take a sip of Coke, for a chance to be featured in a national Coke TV commercial.

Coca-Cola received more than 400 submissions. The top 40, which came from all over the world (including Brazil, Jacksonville, Fla., and Salt Lake City) are featured in the final cut.

The TV spot is the latest evolution of the brand's ongoing, mobile-focused "The AHH Effect" campaign, which includes 61 different AHH.com URLS. The campaign has been expanded this year.

This newest TV ad -- like another one released at the end of March -- will also air on favorite teen networks, this time including The CW, MTV and Adult Swim.