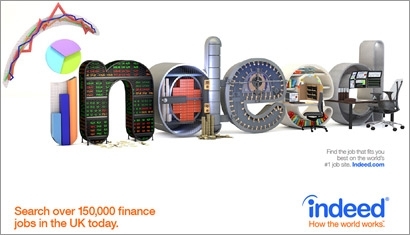 It doesn't matter if a person lives in Athens, Amsterdam or Atlanta -- searching for a job can be remarkably similar and frustrating. Now, the employment Web site Indeed is introducing a new global campaign pitching the notion that its platform makes this process easier.

"The desire to find the right fit -- whether looking for your next great role or your next great candidate is truly universal," says Mary Ellen Dugan, vice president of corporate marketing, Indeed. "When we tested our theme, it resonated across multiple markets. Our goal was to build something that worked across many markets and stands the test of time."

This is Indeed’s first global brand campaign. Mullen is one of three new agencies that Indeed brought on-board in December 2013, following a global agency search. Now, Mullen is the lead strategic and creative agency. Mediacom is the new media AOR and Hotwire is the new lead public relations AOR.

The integrated campaign features a video that used Indeed's employment platform to hire creative and production talent. As part of the creative, Indeed posted 26 job openings on its Web site for roles in the spot. Within 48 hours, 1,500 applications were received. Then, Indeed conducted more than 200 interviews in just 14 days. Once a selection was made, industry professionals from six different countries -- UK, U.S., Canada, Czech Republic, Australia and Germany -- traveled to Prague for filming and production.

"All of the creative elements within the campaign tell the story of how diverse jobs combine to make a something work," says Dugan. "Whether it’s creating the perfect line of code, the perfect presentation, or the perfect cup of coffee, the world needs smart, talented and motivated people to take on life’s daily challenges and opportunities. It’s how things get done. It’s how the world works."

Separately, a coffee cup ad wrap shows what jobs are needed to bring coffee to market. A newspaper ad shows all the jobs involved in publishing the paper. A series of subway ads illustrates all the jobs needed to make a subway system operate.

The campaign originally launched in the UK and will come to additional markets throughout the next year. "You'll see the campaign continue to highlight what we view as a gap in advertising around the jobs space -- a lack of hope and celebration -- and a keen focus to ensure we craft the right touch points in each market. We're excited about evolving the campaign and the potential it has to help more people get hired around the world," says Dugan.

Founded in 2004, Indeed is a subsidiary of Recruit Holdings Co., Ltd. and is available in more than 50 countries and 28 languages.