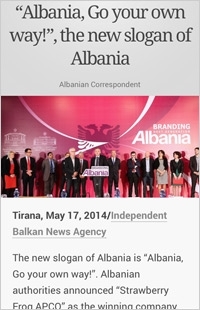 Albania wants you to visit. The European country is embarking on its largest tourism campaign to date and has just named StrawberryFrog, the New York-based creative agency working with Washington-based APCO Worldwide, as its AOR. APCO is the majority owner of StrawberryFrog.

The two firms will cooperate and co-develop the new international advertising and marketing campaign that will include creative advertising as well as PR, digital and social media, and a short film competition.

"We believe that Albania is the unknown pearl of the region," says Scott Goodson, CEO, co-founder, StrawberryFrog. "StrawberryFrog's experience successfully branding Dubai Downtown, Emirates Airlines and Singapore have given us unique experience that will increase Albania's rise to dominance."

The “Go On Your Own Way” campaign will highlight Albania's diverse but largely unknown heritage and attractions. StrawberryFrog will focus on creating a movement to drive Albania tourism, while APCO will focus on improving commerce and investment. The campaign will roll out globally over the coming months.

Tourism is a key focus for the region. The travel guide Lonely Planet ranked Albania as the number-one recommended destination to visit on 2011 based on its azure beaches, good cuisine, heritage sites, nightlife, affordable adventures and the possibility of old-style unplanned journeys.

Younger travelers, in particular, are seeking fresh and interesting destinations. Albania's Ministry of Tourism reports a surge in the number of visitors to this Adriatic country. The total number of tourist arrivals for the first six months in 2013 rose 13% to 1.059 million -- up from 920,448 year-over-year, based on its most recent statistics.

“We are very excited to demonstrate to the world all that Albania has to offer," says Brad Staples, president of International, APCO Worldwide. "We look forward to helping Albania deepen its connections with key audiences that will help the country as it continues to build a modern economy and a brighter future.”

For the agency selection, the country hosted a competitive process broadcast live on Albanian television resulting in the selection of StrawberryFrog and APCO on Friday May 16.

"We are living in a new world and clients are looking for a new kind of communications partner," says Goodson. "We [StrawberryFrog and APCO] collaborated in an interdisciplinary team. Our strategic and creative advertising and digital frogs working alongside APCOs business strategy, stakeholder engagement and innovation experts."

APCO Worldwide operates in 30 major cities throughout the world and maintains a majority interest in StrawberryFrog after StrawberryFrog co-founders Karin Drakenberg and Scott Goodson sold to Margery Kraus, founder and chairperson of APCO Worldwide, nearly three years ago.