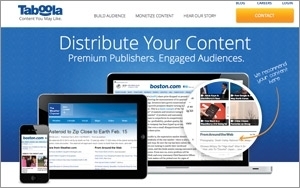 The NAD said it recommended the changes due to concerns that Taboola’s “sponsored content” disclosures “were not sufficiently clear and conspicuous, or easy to notice read and understand.”

Taboola is among several companies that spread sponsored content, also called “native advertising,” across the Web. Taboola typically does so by showing Web users a widget that includes “leads” -- statements like “recommended for you,” or “from around the Web.”

Taboola's widgets include thumbnail photos and headlines, aimed at luring people to click on the material. The widgets also include disclosures like “promoted content by Taboola” or “Sponsored Content by Taboola,” according to the NAD. When consumers click on the disclosures, a link stating “this content is paid for by our advertiser and publisher clients” appears, the NAD says.

Taboola argued that its disclosures, taken together, made clear that the content was sponsored by an advertiser, according to the written opinion.

But the NAD says that many of Taboola's “leads” -- the “recommended-for-you” statements -- make it appear as if the content is editorial. “A message reasonably implied by Taboola’s lead, 'You May Like,' is that the linked content is selected based on the consumer’s interest in the article where the links appear,” the NAD says.

“Even Taboola’s leads 'From Around the Web,' and 'More from the Web,' while not necessarily implying a recommendation from the publisher, can create consumer confusion as to why the links have been placed below the article.”

The NAD also says that Taboola's “sponsored content” disclosures are problematic because they are posted in a small gray font, and are placed on the upper right-hand corner of the widget. The NAD cites the Federal Trade Commission for the proposition that consumers are less likely to notice disclosures in that location.

The decision stems from a complaint by the rival company Congoo, which alleged that Taboola lured consumers to click on its units by failing to label them as ads.

Taboola unsuccessfully contended that it isn't an “advertiser” and therefore isn't subject to the NAD's rules. But Taboola did prevail with a separate argument that it need not use the word “advertisement” in its disclosures. “NAD is reluctant to dictate the terms advertisers should use in future advertising,” the organization said