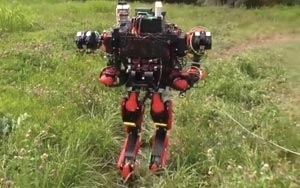 Google will sponsor a robotics exhibit at the Museum of Science and Industry in Chicago in spring 2015, demonstrating power in numbers. It has acquired an army of robotics companies since late last year.

Robot Revolution -- the two-gallery 14,000-square-foot national touring exhibit -- will explore how robots created by human ingenuity will ultimately become companions and colleagues, changing the ways that people play, live and work together.

For each travelling exhibition we secure sponsors such as Google, Boeing and others in this case, to help offset the costs of building the exhibit, per a Museum spokeswoman.

In addition to Google, the exhibit will gain support from The Boeing Company, RACO Industrial, The David Bohnett Foundation and The Kaplan Foundation.

The exhibit will feature six areas -- cooperation, smarts, skills, locomotion, build a bot, and robo stage -- each exploring  various aspects of robotics. The exhibit will offer specific hands-on activities, allowing museum guests to step into a world where robots are not just curious, but an asset, per the museum.

The Cooperation exhibit will demonstrate how robots can work with humans effectively to assist and enhance lives. The Smarts exhibit will identify how these machines sense, plan and then act on events, while comparing and contrasting the ways in which humans and robots learn. The Skills exhibit will teach people about the skills robots possess to mimic and learn from human actions.

The exhibit will showcase 25 robots from several robotics companies, including PARO, the furry baby seal robot used as a therapy tool for the elderly and autistic children.

Google began buying up robotics companies in 2013, acquiring Boston Dynamics, a spinoff from the Massachusetts Institute of Technology, among others.