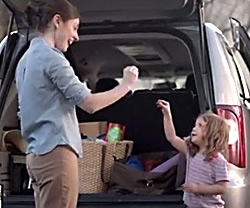 American Licorice Co., maker of Red Vines and Sour Punch candies, has created a multi-platform campaign for the launch of Fruit Vines Bites.

Targeted candy fans, including Red Vines fans, "embrace life and want to enjoy it to its fullest, so we came up with the tagline 'Live on the Sweet Side with Fruit Vines' to introduce the soft, chewy, fruity candy as a way to celebrate life’s sweet moments," Michael Kelly, media/consumer communications manager for American Licorice Co., tells Marketing Daily. The campaign was designed to let these on-the-go consumers interact with the brand through numerous touchpoints, he adds.

The campaign, from the Phelps agency, includes a 30-second TV spot that began airing on national cable on May 19.

It features ordinary moments that turn into small victories, like acrobatically catching a phone with a shoe before it hits the ground, and expertly folding and fitting a stroller into a crowded trunk in a few seconds. These "sweet victories" are marked by the actors doing the brand's own version of a fist bump: Bumping their bite-size Fruit Vines Bites candies together before popping them into their mouths.

In addition to running the spot on The Hallmark Movie Channel (among others),  Fruit Vines Bites will sponsor the May 31 premiere of “The Color of Rain,” an original Hallmark channel film.

The commercial also has three 15-second versions, which will be phased in over the summer and will run on cable TV and online.

Building off the strong Red Vines social media following, the company is introducing consumers to Fruit Vines Bites via cross-promotion of videos, Vines and photos on various social assets, including Twitter and Facebook.

"We made sure to build our hashtag #SweetSide into the TV spot to encourage fans to show us what moments, big or small, deserved a sweet celebration with Fruit Vines," Kelly says.

For this launch campaign, the company also diversified its online presence to reach its consumers with ads while they're on top Web destinations, using targeted pre-roll on Hulu; takeovers and halo units on AOL properties; branded integration on the new The Weather Channel mobile app; and a free MP3 download on Pandora (“Love Runs Out,” by OneRepublic), reports Kelly.

The campaign also includes a mobile sampling tour, in partnership with CBS Radio. The tour, which will run from May 18 until September, will visit more than 25 stops in New York, Los Angeles, Chicago and San Francisco. One top-40 CBS Radio station will be the main sponsor in each market, and will feature on-air endorsements, along with online and on-site activations.

In addition, the launch campaign includes a national FSI, and media relations.

Fruit Vines Bites are available nationwide at retailers including Walmart, Walgreens and Kroger, with Target expected to have stock in June.