Episode 706: The Strategy, Or Design For Living 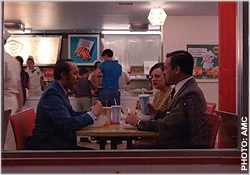 “The Strategy,” the second-to-last episode for this half season (gulp), opens with Peggy standing in a Burger Chef parking lot. She’s invading the window of a station wagon in an attempt to extract nuggets of research wisdom from an annoyed, harried mom and her hungry kids.

It ends with Peggy seated inside the Burger Chef, talking, eating, laughing, and enjoying the ease and warmth of her office family.

This was a fantastic episode,  all about growth, vulnerability, and being able to strip yourself down enough to tell the truth. It was also about having the vision to figure out the right questions to ask -- which Peggy did not do in her market research.  Those include “Who’s your real family?” and even “What is a home?”

While the episode left me with a sweet and fluid sense of human possibility, the main issues it raises -- of how to find a balance between the demands of family and work, and how to make a marriage and family work -- are not only still with us, but even more complicated.

And with the firing of Jill Abramson last week at the New York Times, and the idea of a new kind of “glass cliff” emerging for women leaders, it would seem that women's struggles will be never-ending.

Still, there may be a strategy to deal with those issues. During their breakthrough session in the office on Sunday, when Don once again becomes Peggy’s support and mentor, he offers an existential answer: “The job is living in the not-knowing.”

Weiner seems to believe in forcing his viewers to live in the “not-knowing.”  He strung us along until we got to this episode, so beautifully directed by Phil Abraham that it seemed to defy time and space.

The ending, with its unexpected, heart-stopping dance that Don and Peggy do to “My Way,” (easily one of the best scenes ever in the show's entire run) followed by a tracking shot of this new kind of family, is luminous. 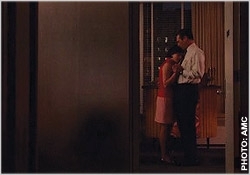 And though I hate to harsh all of our mellows, let me just stay that the next and final episode for this half-season is called “Waterloo.”

So let’s just bathe in the beauty-osity while we can.

“It’s nice to see family happiness again,” the ever-Jurassic Lou says, about Peggy’s initial Burger Chef presentation, based on the standard ad fantasy about Mom, Dad, Junior and Kitten. Obviously, Lou is working off the old paradigm. But that set off the whole premise of the episode, of questioning exactly what is a family, and for that matter, what is happiness?

I loved Don and Peggy's mutual expressions of vulnerabilities. Peggy admits she's now 30 and lying about it, Don admits he worries “Have I done anything? Do I have anyone?" Which surprised me, and is a real switch from Peggy’s line from an earlier season, when she says to Don in exasperation, “You have so much.”

His relationship with Megan is indeed up in the air. (And that was a “fall” she was wearing on her visit to the office, providing the longer hair.) At the office, the second Mrs. Draper finds out that Peggy’s secretary didn’t even know Don was married. And Megan gets a much more animated reception from old “Love Beads” Stan than she does from Don. 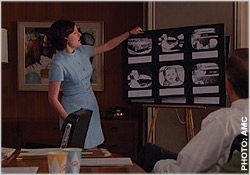 Her visit made me recall that offhand but dazzling riff that she and Don effortlessly executed for Miracle Whip, which was as full of chemistry as the product itself.  Then Megan refused to work in advertising, and Don had to try it with Peggy -- and that same riff was so ultra-awkward it was like watching teeth rot. (By the way, did Megan’s teeth get bigger?)

By the end of her visit, Megan seems more interested in finding her fondue pot than having a true resolution with Don. In her search, Megan’s domestic life is literally out of the closet. Don picks up the New York Times from the day of Kennedy’s assassination. I guess his memory of that event is also linked to breaking up with Betty, which happened shortly afterward. The assassination headline could also augur the death notice of Don and Megan's marriage.

Meanwhile, Don has reestablished a magnetic partnership with Peggy. They’ve been through a lot together, and have literally saved each other’s lives.

And their talk of 1955, 1965 and 1969 is inspired, and meant to explain the difference between Peggy's first attempt at the ad and her later revision and questioning of the whole concept of family, given all the social, sexual, and political tumult of the 1960s.

In the first ad, echoing 1955, Dad is driving. Then 1965: "Does this family even exist anymore?" And then Peggy’s final tag line, fraught with resonant meaning:  "What if there was a place without TV, where you could break bread, and whoever you are with was family?" 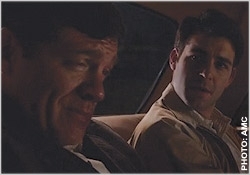 This goes too for Bob Benson, who aptly brings an erector set to Joan’s apartment, with which to engineer his perfect fake family to impersonate a proper GM executive.

Joan, known to make bad bargains in the past, speaks from her heart.  She tells him he should have it his way.

And on a much more surface-to-actual advertising note, there was much cleverness in having Don and Peggy dance to the Chairman of the Board’s even-then slightly hokey “My Way.”

Burger King famously used “Have it Your Way,” and is (sort of sadly) readapting it now.

And by 1970, McDonald’s had started its first national ad campaign ever, with the timeless, iconic line written by DDB’s Keith Reinhard: “You Deserve a Break Today.” That was a result of the same conclusions that Peggy came  to: that people a) were worried about cleanliness (the original ad showed countermen singing while swabbing the entire store); and b) that people needed “permission” to buy fast food. 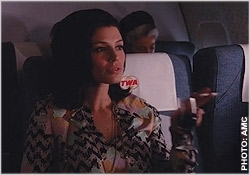 And the whole idea of Pete treating his ambitious girlfriend like dirt (like her feet), while not giving Trudy permission to divorce and date, just shows his awful misogyny and hypocrisy -- all based, of course, on his obvious longing for a true family. Then he takes Peggy’s autonomy and permission away, telling her to do the “emotion” in the Burger Chef presentation as the mom, and giving the authority to Don (Dad.) It doesn’t occur to anyone that Peggy has no idea how to be a mom, while buried deep in her is the reality that she gave her (and Pete’s) child away.

“My Way” includes that line about “The final curtain.” And that scene showing both Bonnie (nee Bonita) and Megan leaving on a jet plane pretty much spells it out when the stewardess actively pulls the curtain on their section: Those relationships are toast.

I read Don and Peggy’s slow dance as a lovely  father/daughter bit. Others see it as the possibility of a new romantic pairing.

I can’t bear that next week is the (fake) ending for another 10 months, when we’ll get the (real) final seven episodes.

Both Don and Peggy have come a long way from the low point of the season, when Peggy was down on her knees in frustration and Don was contemplating death on the balcony. Both seem to have chosen the path of redemption. Could there be more progress ahead when we reach our “Waterloo”?

I’m not sure I can live in the “not-knowing.”  Damn you, Weiner!

27 comments about "Episode 706: The Strategy, Or Design For Living".
Check to receive email when comments are posted.
Read more comments >
Next story loading