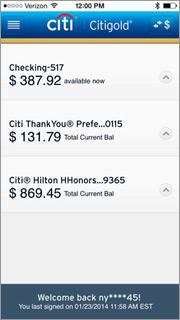 Citi on Wednesday introduced a new feature that lets users of its app get basic banking information without having to log in each time. The opt-in feature, called Snapshot, shows deposit and credit-card balances, as well as recent transactions, when a user opens the Citi Mobile app.

All account transactions, however, will continue to require users to log in. The rollout of Snapshot is part of the redesign of the Citi banking app launched earlier this year. It's aimed at providing a streamlined user experience and on-the-go alerts for customers using the iPhone or Android devices.

The move also follows a three-month beta test of the feature in which Citi said more than half of those who download the new app (among hundreds of customers surveyed) chose to enroll in Snapshot. Those who tried it had a better impression of the app than those who didn’t or weren’t aware of it.

“We used this method to learn directly from customers who would be using the feature in the real world, and we’re glad we did," said Melissa Stevens, head of Internet and mobile banking for Citi’s Global Consumer Bank, in a statement. She added that the bank also gained valuable insights about how to improve the enrollment process for Snapshot.

The feature grew out of customers’ desires for fast, simple access to account information, according to the banking giant. But making it easier to get banking information by eliminating the need to log in every time also raises a question about security.

In that regard, a Citi spokesman said the app has security features built in that monitor things, like time elapsed since the last full login with a password, ensuring the smartphone is the same device a user enrolled in. In addition, rules prevent personally identifiable information (PII) from being displayed, which would compromise privacy.

If a phone fell into the wrong hands, someone could potentially connect account information with other identifying data found on a smartphone to connect it with a particular individual.

An annual report on mobile banking, issued in March by the Federal Reserve, found that a majority (51%) of smartphone users have used mobile banking in the past 12 months, up from 48% a year ago. Among those who don’t use mobile banking, however, security concerns persist, with 69% of those surveyed citing concerns such as a reason for not banking by phone.

A Citi spokesperson didn’t disclose how many customers use its app, but said the number has increased 62% since the start of 2013. Citi Mobile has a rating of three of five stars in the iTunes App Store, based on feedback from more than 25,000 users. The latest version follows about a month after Chase released a major update of its own app.