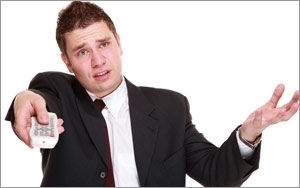 People are less pleased with their cable, satellite and Internet companies (which are often the same) than they ever have been.

According to the American Customer Satisfaction Index’s annual measure of the communications sector, Internet service providers only get a score of 63 (based on a 100-point scale, down 3.1% from last year), while subscription TV services receive a score of just 65 (down 4.4% from last year). These two categories are the worst-performing of all 43 tracked by the ACSI.

When it comes to subscription television, customer satisfaction is lower for cable companies (average score 60) than for satellite or fiber optic companies (average score 68). Despite losing ground over last year’s score, AT&T (-3%) and DirectTV (-4%), which are currently in merger negotiations, tied for the sector’s top score of 69, while Verizon Communications’ FiOS and Dish Network received scores of 68 and 67, respectively.

All of those scores are higher than the highest-performing cable provider, Cox Communications, which had a score of 63. Comcast and Time Warner, which are also in merger negotiations, received the lowest scores of 60 (-5%) and 56 (-7%), respectively. The scores are indicative of an industry that has little incentive to change, says ASCI director David Van Amburg.

“If someone comes up with another model that is more satisfying with a better price, then things may change,” he tells Marketing Daily. “When there’s not healthy competition, there’s not a lot of incentive to bend over backwards to delight us as consumers.”

Meanwhile, Internet service providers (many of which are the same companies as subscription TV providers, dropped 3.1% to an average score of 63, the lowest score across all sectors. Verizon’s FiOS scored the highest at 71, while AT&T, CenturyLink and other smaller broadband providers had scores of 65. Comcast and Time Warner were again at the bottom of the list, with scores of 57 and 54, respectively.

As a whole, the Internet providers suffer from high consumer expectations. A little more communication about the limits of broadband capabilities, particularly as more devices use a particular service could help improve these scores, VanAmburg says.

“They could be doing a better job of helping customers manage those expectations,” he says. “Beyond that, these companies can do a better job in terms of customer service.”

Things are a bit rosier in the wireless industry.As the adoption of smartphones has increased, consumers are pleased with their ability to do more with their handsets, leading to an average industry score of 78 (up 2.6%). Samsung, meanwhile, racked up an ACSI score of 81 (up 7%), while Apple’s score declined 2% to 79. This marks the first time Samsung has topped Apple in customer satisfaction, showing that many consumers are viewing all smartphones at parity, VanAmburg says

“As we’ve seen that [overall rate] of smartphones increase, consumers satisfaction has increased,” he says. “It’s hard to see where the next ‘Wow!’ phone will come from and what that will be like. The game-changing moment has passed and we don’t know what the next game changer will be.”

The proliferation of these smartphones, however, has led to a stagnation of scores among wireless carriers. The sector’s average score this year is 72, the same as last year’s score. Verizon Wireless, however, improved its standing, up 3% to 75, followed by T-Mobile (69), Sprint (68) and AT&T Mobility (68).