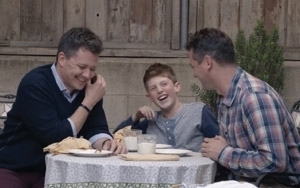 Honey Maid had to get cracking. The Mondelez graham cracker brand has a range of new products coming and is facing -- as a politician might put it -- a new reality in America. Which means a new consumer reality. But while the brand's equity is "wholesome," its reputation was old fashioned. The company wanted to make the brand current and boost the emotional currency as well.

Gary Osifchin, senior marketing director, wholesome sweet, entrepreneurial brands and channels at Mondelez International, speaking at OMMA Mobile on Thursday, said the company last year began working on a new campaign addressing consumer truths. Honey Maid sought "to reinvent the Honey Maid in a way that's relevant to moms and dads now," he said, adding that it also needed to happen because the company had not done any major branding in over a decade.

The 90-year-old brand tapped Droga5 to research and invent a creative direction imbued with the brand’s wholesomeness equity. The first and key point, he said, is that families are less and less traditional now. "Only 62% of children live with their two biological parents; three million LGBT parents are raising 6 million kids in the U.S. In 2012, 40% of births were to unmarried parents. One in 12 married couples were interracial, and six million kids were being raised by grandparents.

The company in March launched the resulting campaign with social engagement and video, anchored in TV, broadband, and mobile with a family-moments narrative design and a documentary-based structure.

Creative is anchored around diversity in the context of a changing family. It features real families, including bi-racial, lesbian, gay couples, a family with a tattoo-festooned rocker as a dad, and single parents. The campaign included 30-second TV and Web videos featuring each of the families. The ads and online video are shot documentary style with the online content running two minutes. "We chose families we thought would be highly relevant to consumers. We had that strong point of view and stayed true to it."

Osifchin said the launch generated big earned media with an exclusive in USA Today, and "ignited overwhelming positive response." The company installed a social media station at the agency for the first week, and fielded responses, he said, although ignoring the eviscerating fundamentalist rants, such as one person's tweet that Osifchin was Satan for celebrating gay and bi-racial marriage. And tattoos.

But the company actually did judo with the negative missives, which constituted a tenth of the total, he said. Honey Maid made a "love" video, seeded to the Web via a $25,000 media spend.

The video, for which the company tapped a pair of material artists, shows the two artists gluing together paper rolled into tubes. These were the ones bearing the most caustic comments. They were positioned vertically and glued side by side to form a three-dimensional "love" rune. The artists then encircle “Love” with many more paper tubes containing all of the positive commentary.

"We got a million views in less that 24 hours and 3.5 million views in in four days." he said it was shared over 300,000 and raised search volume for the brand by a factor of seven. "I got more media impressions from than this than I got for all paid placement we did early in the campaign."

He tells Marketing Daily that he sees it as a 10-year plan, starting with social elements encouraging people to upload photos of their family, including wholesome and not-so-wholesome quotes.