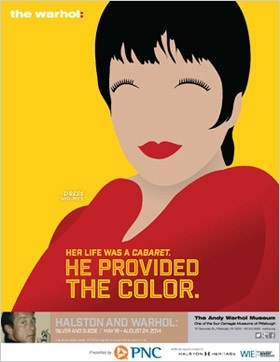 Marc USA has created a new campaign to promote a traveling museum exhibit showcasing the lives of two of the 20th century’s most celebrated cultural and fashion icons: Andy Warhol and designer Halston.

The work was done on behalf of the Pittsburgh-based Andy Warhol Museum, where the exhibit will be presented before going on a road show.

In order to promote the new “Halston and Warhol: Silver & Suede" exhibit, Marc USA is introducing a multifaceted advertising campaign that combines pop-art with caricature.

The concept chronicles Halston designs that continue to have influence today with an overlay of Warhol images. One image, for instance, shows an outline of Liza Minnelli's face and her figure wrapped in Halston’s signature red sequin dress with the tagline: “Her life was a cabaret. He provided the color.”

Another outlines Jackie Kennedy in the Halston pillbox hat with the line: “She was the queen of Camelot. He provided the crown.” The third shows Elizabeth Taylor, with only her famous mole defined, wearing Halston’s wrap dress.

“Halston and Andy Warhol traveled in the same circles and influenced each other’s work,” explained Michele Fabrizi, President/ CEO, Marc USA and Chairman of The Andy Warhol Museum board. “This campaign pays tribute to their relationship while showcasing the significant contributions Halston made to fashion. While Halston dressed these icons, Warhol painted them and was friends with all three. It’s the perfect platform to introduce this exhibition.”

Executives say the major challenge was getting approval from the estates of Elizabeth Taylor and Jackie Kennedy to use their images. Liza Minnelli, however, said she loved the work.

The campaign will be running throughout the Pennsylvania/Ohio corridor, particularly in Pittsburgh and surrounding markets. Ads will also run in newspapers and magazines, such as Cosmo, Elle and InStyle. Outdoor ads will wrap two-story buses, run across Pittsburgh subway stations and digitally greet visitors to Pittsburgh airport with images that include Liza Minelli’s eyelashes wink and Liz Taylor’s head tilts.

This campaign is notable for the fact the ads were illustrated in house, by Marc Art Director Craig Ferrence who partnered with Adam Cicco under creative directors Greg Edwards and Josh Blasingame. Typically, most art directors will draw comps or story boards, but not usually the actual ad. However, Marc has an ongoing relationship with The Warhol Museum having created campaigns for them over the past several years.

The exhibit's name references Halston’s innovative use of Ultra Suede and Andy Warhol’s Silver Factory studio. The exhibition also coincides with the restaging of the museum with Warhol’s work now hung in chronological order. Visitors can experience how Warhol’s art evolved by beginning at the top and journeying down, moving from early to later works.

“Silver and Suede” will be at The Andy Warhol Museum from May 18 through August 24. The exhibition will also visit Des Moines, Iowa, Halston’s birthplace, and the Mint Museum in Charlotte, North Carolina.