Philadelphia Serves Up 'Phillyosophy' For Campaign 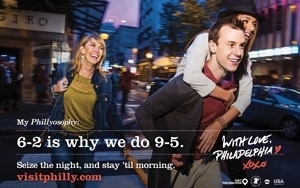 Is it warm yet? For Philadelphia, Spring couldn't come soon enough. The city's tourism organization, Visit Philadelphia (formerly the Greater Philadelphia Tourism Marketing Corporation), early this year introduced a spanking new campaign to show off the city. But with the brutal, lengthy winter, the effort had to hang fire. Carrying a "Phillyosophy" moniker, the campaign, via Philly-based Red Tettemer O’Connell + Partners, moves from red, white and black-toned love letter motif to a much more eye-pleasing direction that is all about photos that should fit nicely with Spring and Summer.

"Phillyosophy," which stays with the "With Love, Philadelphia XOXO" as an overarching tag, ties photos of the city to a rhetorical device whereby "My Phillyosophy" is followed by things like, “Finger food is good. Both-hands food is better” and "A dozen roses is no match for thousands of them," with an aim to tout nightlife, food, sights and events like the Philadelphia Flower Show in the case of the latter example.

Visit Philadelphia launched the former "With Love" campaign in 2009, right after the recession hit. Visit Philadelphia says visits increased after that in spite of the economy, which may have something to do with people taking more modest vacations.

Meryl Levitz, president and CEO of Visit Philadelphia, tells Marketing Daily that the new campaign was, in part, consequent upon a raft of market research showing that while the "With Love, Philadelphia" campaign did bring ROI with those higher visitation numbers, people wanted to see more than black, white and red, the main schema for the love-letter stylings of the former campaign.

"['With Love'] gave Philly a funny, warm voice. Then we did focus groups after the fourth year and people told us they loved it, that it was funny and quirky, but they also said that there should be more visual elements. The other thing they told us was that they felt Philly had, in these intervening years, developed so much as a food, nightlife, romance, and family destination that seeing some specific imagery that spoke to those would be more successful, intriguing and inviting. We began working with our agency to answer to that. Now it's more compelling and includes very strong social media."

Creative spotlights things like the city's two waterfronts; people enjoying small food in different places, such as a sidewalk cafe, running, kayaking, and visiting gardens and parks, museums and monuments. "We're showing lots of outdoor options. The other thing working in our favor is that visitors interpret doing history as an outdoor experience, as well."

Though some of the work has been out since the first quarter, the major elements of the campaign will hit in June, per Levitz. "There was no point in spending money early in the year when it was freezing. So we may be dealing with compressed season, but also may have pent-up demand at our disposal. and the uncertainty about the sequester and what's open and closed won't be plaguing us this summer as it did last summer," she says.

The campaign's June components will include a takeover of Penn Station and Grand Central in New York, and a branded-content insert in the June edition of U.S. Airways' in-flight magazine comprising 43 pages of "Phillyosophy" content. Out-of-home will include buses, trains, and flash writers. And there are elements on Facebook and other social channels, the city's visitor website and blog, visitphilly.com and uwishunu.com, respectively, which the organization says make up the most-visited website network out of the 10 biggest U.S. cities.

The timing puts the campaign proximal to the date when the city unveils a new wing at the Franklin Institute; the opening of new exhibitions the Barnes Foundation, the Philadelphia Museum of Art and the Academy of Natural Sciences; and the appearance of summer outdoor programs like pop-up spaces at Spruce Street Harbor Park, and a two-month riverside marina/park installation on the Delaware River waterfront replete with a boardwalk, floating restaurant, hammocks, games, lily pads, nets over the water, and fire pits.