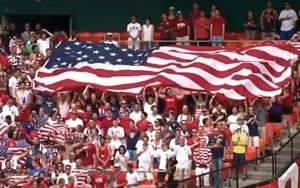 As Brazil prepares to host the World Cup, Google analyzes a surge in searches related to the sport. While the tournament -- scheduled to begin in June -- provides another opportunity for marketers, the playbook on how to reach fans continues to change.

Despite the sport's popularity in Latin America, worldwide the World Cup has more interest on Google's search engine than football, Olympics, and the Tour de France combined. In fact, Google sees most searches for the World Cup coming from urban areas, and many of these cities have high Hispanic populations. Portland, Ore. takes the No. 1 spot in the U.S. for World Cup searches in top metro areas. The Miami and Fort Lauderdale area takes the No. 2 spot, followed by Houston, New York, Los Angeles, San Diego, and Washington, D.C.

Worldwide views of sports videos on YouTube between April and May, 2014, show soccer is the most watched sport, leading wrestling, basketball, boxing, martial arts, American football, and skate sports. In fact, Google estimates 1.6 billion views of soccer content on YouTube globally between April 13 and May 13, 2014. About 64.7 million hours of soccer content are watched on YouTube globally, compared with nearly 72,000 hours of broadcast globally for the last World Cup.

This year's top videos already have already 4.6 times more views on YouTube than the top five in 2010, per Google.

Mobile increasingly plays an important role. Google notes that it only saw about 18% of searches for games, players and teams during the World Cup final on mobile devices in 2010, compared with 63% during the UEFA Champions League match in 2014.

Sports fans aren't just searching more on mobile -- Google has identified new behavior patterns. Analyzing a UEFA game this year, more searches occurred during the game, mostly when goals were scored, but their combined volume surpasses the searches at the end of the 2010 World Cup match. This represents a vast difference when compared with searches during the 2010 World Cup games, when query volume dipped during game time while most viewers were glued to the big screen.